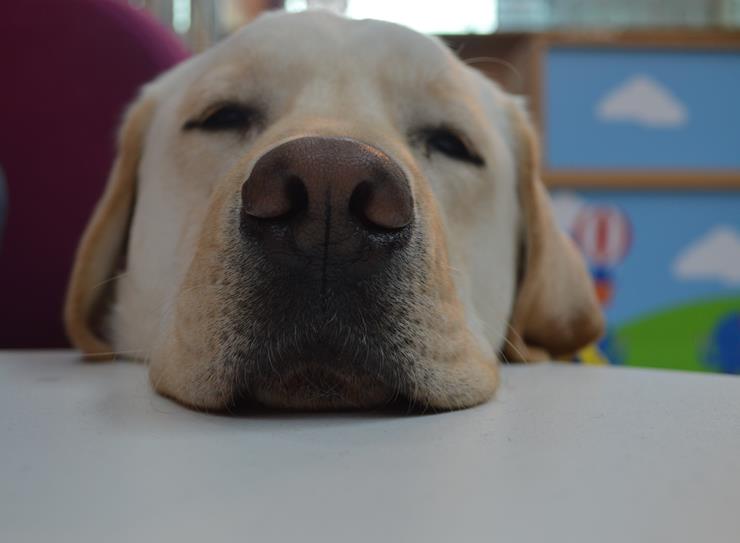 To celebrate National Pet Month, we would love to introduce you to a very special member of the Alder Hey Family.

Holly is a 2½ year old Labrador Retriever and provides an incredible voluntary service here at Alder Hey, bringing smiles and cuddles to children, parents and staff. Every week Holly visits with her companion Barry, a registered Therapy Dog Handler. He describes her as “an equal opportunity cuddle pot” bringing joy and important distraction at difficult times for children and their families, adding “and of course all the staff love her too”. We can’t argue with that!

“The best thing about bringing Holly to Alder Hey is the look on people’s faces. There was a little girl in a wheelchair in the Atrium who became very excited and animated when she saw Holly. The little girl couldn’t easily hug Holly, so Holly came to her; sitting with her on the seat of her wheelchair, Holly rested her head on her shoulder so that the little one could have a cuddle. I can tell you, there wasn’t a dry eye in the house!” Holly is a friendly face to patients who are here with us for extended periods of time and may be missing their own pets at home and is particularly useful for autistic children, who often bond with and relate better to therapy animals than humans. Holly also works with young people with cynophobia (a debilitating fear of dogs) through Alder Hey’s CAMHS team and is proud to have a 100% success rate.

Barry is an expert when it comes to Therapy Dogs and had his first dog, Rosie, whilst working as a paramilitary police officer in Asia. “Rosie was from Australia but worked with me in Asia for 10 years before travelling with me through Hong Kong and Singapore before returning to the UK.” Sadly, Rosie passed away last year, at a grand age of 16, but had time to pass on her tricks of the trade to Holly. “I got Holly when Rosie retired and she learned a lot about what it takes to be a good therapy dog from Rosie. Any dog could be a Therapy Dog but a lot of it is down to disposition and some clear do’s and don’ts”. Holly was assessed and registered last year, which included assessment by a third party professional; Barry explained “there can be no noise, no jumping up or pawing. If there is a child with a line in or recovering from injury, you obviously wouldn’t want them getting tangled up or risk any further injury…Holly is so calm she has been accused of being boring!” 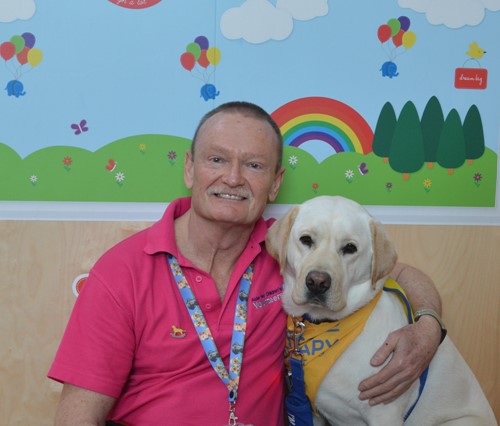 Thank you to Barry for bringing Holly “the cuddle pot” to Alder Hey, spreading happiness during National Pet Month and throughout the year.