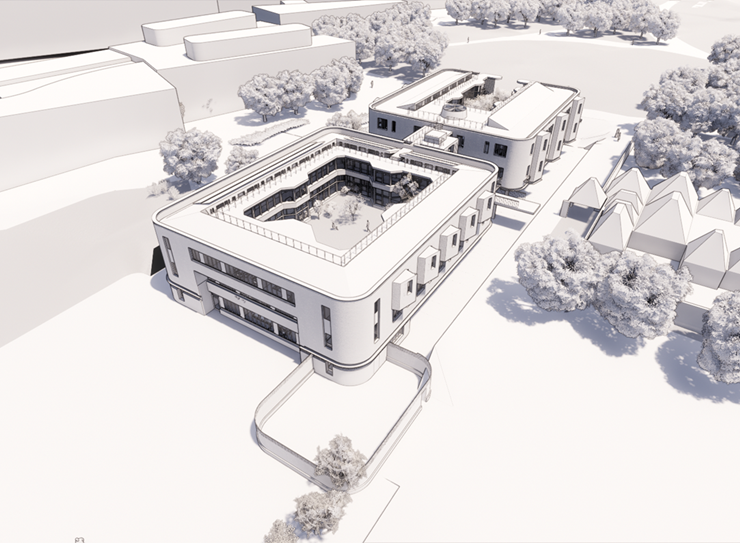 After a thorough process involving staff, children and young people and their families, the new inpatient unit and ‘community cluster’ buildings both now have names.
The buildings are currently under construction next door to the Institute in the Park. Watch the video to see how we are progressing!

The inpatient unit will be known as Sunflower House, and the ‘community cluster’ will be The Catkin Centre.

The name Sunflower House was put forward by children currently under the care of the Dewi Jones Unit (which is what will become Sunflower House when it relocates). A list of names was presented to the children for them to consider, along with the option to come up with their own. They suggested ‘Sunflower House’, representing growth, tall and strong, and reaching for the sun. They also told the panel how important their garden and outside space has been for them during the last 12 months. When the reviewing panel heard this, they loved the idea and the thinking that had gone into it.

In honour of Dewi Jones, the pioneer and consultant in child and adolescent psychiatry who took a lead role in setting up and organising mental health services for young people in and around Liverpool and after whom the current facility was named, the gardens of Sunflower House will be named the Dewi Jones Gardens.

The Catkin Centre gets its name from the seedpod of an Alder tree which is called a ‘catkin’. Like Sunflower House, this represents new life and growth, in this case borne from the Alder tree, of course symbolic of Alder Hey.

When the name ‘Catkin’ was suggested, service users were initially unimpressed – but once they understood its meaning, they changed their minds. One young person really ran with the idea and suggested that we make a point of learning the meaning behind the name by installing artwork at entrances to the Centre, explaining what a catkin is. That’s a great idea, and that’s what we’ll do.‘Catkin’ is of course the name of the building which currently houses those services that will relocate to the Catkin Centre when it opens.

Donate to our Appeal