Meet Summer from New Brighton, who has Down’s syndrome. She became ill with a virus and rash before she was diagnosed with Acute Lymphoblastic Leukaemia (ALL), a type of cancer that affects the white blood cells.

Summer’s Consultant, Dr Chris Howell explains “ALL is the most common form of cancer affecting children. It is also more common in children with Down’s syndrome. In ALL an abnormal population of immature white blood cells is present, and begins taking over the normal production of blood. Treatment for ALL has a number of phases. It is most intensive at the beginning, and Summer had a tough time for the first few weeks as she was in and out of hospital with temperatures and other chemotherapy side effects.”
One day during her treatment she was visited by Georgina, an Arts for Health practitioner at Alder Hey and a cellist at the Liverpool Philharmonic Orchestra. As soon as Georgina started playing Summer’s mood improved, she sat up in bed, started clapping and engaged with the staff. 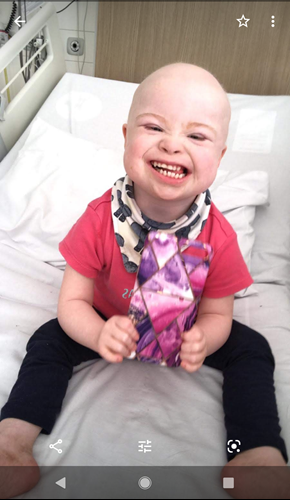 Mum Leanne says she sincerely believes that Summer would have “given up” had Georgina not called in and played music that day.

Georgina is clear about the impact of music on our young patients “By just walking on a ward with a cello and a trolley filled with percussion instruments, young people gather that I’m bringing something different, something non-judgmental, non-medical. The live sound of music on a ward can create a point of focus, it brings people together, we build trust, have fun and keep a sense of play.”
Dr Chris Howell said “Summer is now in the maintenance phase of her treatment, which mainly consists of regular clinic appointments and oral chemotherapy given at home, and is now full of energy and never stops going.”

Mum Leanne has nothing but praise for the medical treatment Summer received at Alder Hey: “When Summer was first diagnosed, we really didn’t think we’d see her start school or that our lives would ever be the same again. Without the amazing team on 3B we wouldn’t be where we are now. Summer always signs ‘love you’ to her 3B family when we get in the lift to leave. The team have become forever friends and family; they are angels in our eyes.”

Photo taken by family and used with permission.