We broke a World Record! 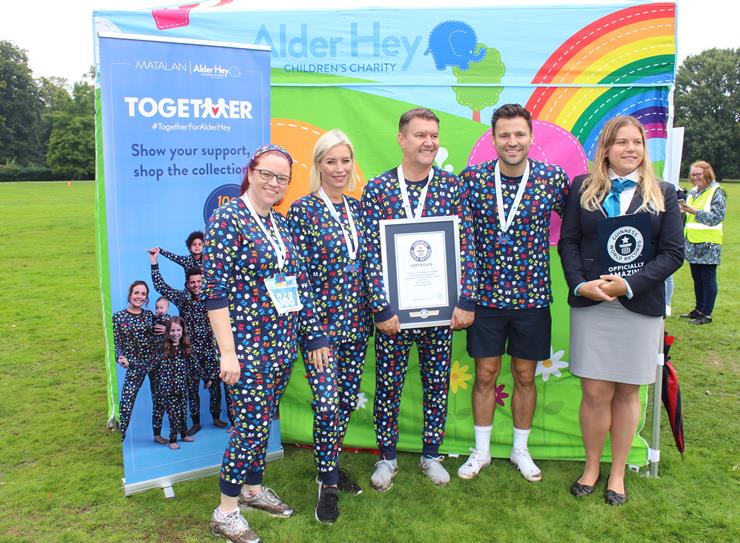 Runners in PJs broke the GUINNESS WORLD RECORDS® title for the most runners linked to complete a 5km race on Sunday 22nd September.

The old record of 190 set in 2017 by the Aruna World Record team was smashed at Alder Hey’s inaugural ‘Run Together’ PJ fun run sponsored by Matalan with an amazing 215 completing the course linked together.

Staff from Alder Hey and Matalan joined fundraisers at Croxteth Hall and Country Park in Liverpool along with celebs such as Denise Van Outen, Mark Wright, Daniel Taylor and Shirley Ballas at the successful GUINNESS WORLD RECORDS® title attempt.

Runners had to complete a 5km course linked together using with elasticated rope which was fitted around each person’s waist. They completed the course in 1 hour 2 minutes and 2 seconds.

Adam Dixon, Community Fundraiser at Alder Hey Children’s Charity said: “What an amazing day! It sounds so good to be official GUINNESS WORLD RECORDS® title holders!  I’d like to say a massive thank you to everyone who came down and completed the run. It was so much fun and more importantly we have raised lots of money for Alder Hey.”

Jason Hargreaves, Matalan CEO said: “We did it! What better way than this to commemorate an amazing campaign and support this incredible hospital? I am so proud and extremely grateful to everyone who helped us achieve a GUINNESS WORLD RECORDS® title.”

The GUINNESS WORLD RECORDS® attempt was part of the campaign for this year’s annual Alder Hey and Matalan collaboration which is themed #TogetherforAlderHey.

Since 2014, Matalan have raised a staggering £2.7m for Alder Hey with their annual collaboration selling a number of products including PJs, hats, scarfs.