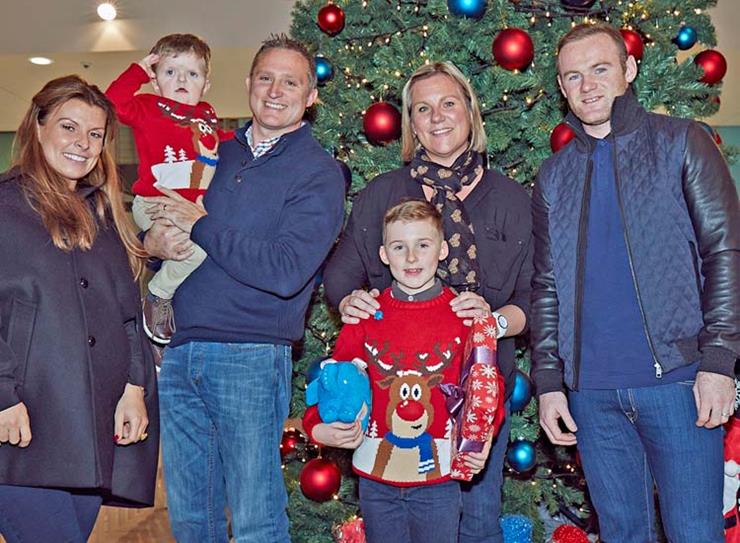 The sum comprises all profits, after operating costs, from the sell-out match played at Old Trafford in August between Wayne’s only two Premier League clubs. This follows the player’s commitment that all match proceeds – and those of subsequent headline Foundation events – should go to help vulnerable and disadvantaged youngsters.

Wayne set up the foundation to improve and inspire the lives of children faced with often overwhelming health issues, abuse and educational challenges. BT is a founding and principal partner of the Foundation.

Proceeds from the Testimonial match, which celebrated Wayne’s 12 remarkable years with Manchester United since his transfer as a teenager from Everton, will be distributed through the Foundation to four chosen charities and used to fund legacy projects. Fundraising was supported by BT MyDonate, a not-for-profit, online fundraising service for UK charities.

Those benefitting are the NSPCC - of which Wayne is the inaugural Ambassador for Childhood - plus three North-Western charities whose work is close to his and wife Coleen’s hearts. These are Claire House Children‘s Hospice, Alder Hey Children‘s Charity and the Manchester United Foundation.

The fundraising work of the Wayne Rooney Foundation will continue unabated in 2017 with high-profile events to be announced in due course.

Wayne said: “I’d like to thank all the fans who came to the testimonial and made it such a special night. They’ve raised a huge amount of money for children who are disadvantaged and it will make a real difference to their lives.”

Wayne Rooney Foundation Chairman Rob Cotton adds: “Wayne has shown an extraordinary drive in setting up the foundation and continues to do so. We’re looking forward to the exciting events in 2017 which we hope will help us reach our fundraising goal of £5 million.

“In addition to the generosity shown by United and Everton fans, we’d like to thank the foundation partners without whom we could not have raised so much money so far. Principal partner BT broadcast the testimonial and helped fundraising using their MyDonate platform. Facebook enabled Wayne and United to stream the match live whilst Key 103 radio promoted the whole event.

“Think Money Group and Hublot made significant contributions and of course Manchester United Football Club were exemplary hosts to over 60,000 fans at Old Trafford on the night.”

BT Sport screened the game live to kick off its Premier League football coverage for the 2016-17 season. BT MyDonate was the official fundraising platform for the Testimonial, with both online and text to donate options promoted throughout the match. BT volunteers manned a call centre on the night to take donations by phone, and collected donations from fans at the game.

BT Chief Sustainability Officer Niall Dunne, said: “We are proud to have helped Wayne Rooney raise such a fantastic amount for his foundation and look forward to working together to reach the £5 million goal. Each year, BT invests at least one per cent of profits back into society and aims to use skills and technology to help generate more than £1 billion for good causes by 2020.”

The match was the first match between two Premier League teams to be streamed live on Facebook. Both Wayne and Manchester United streamed the game to their fans around the world. Over 3.7 million people watched the match, which made it the most watched live football game at that time on the social media network.

Group Managing Director of Triple S Sports and Entertainment Paul Stretford commented: “Close collaboration with Facebook enabled us to reach a global audience, and most importantly, raise vital awareness and funds for an incredible cause. Facebook's scale and reach meant that anyone in the world could tune in to watch the testimonial and connect with others fans to share in this magical moment celebrating Wayne's career.

“Wayne and the Triple S Group are committed to raising £5million for the four children’s charities in the UK - none of whom receive any form of government funding.”

Head of Corporate and Major Giving from Alder Hey Children’s Charity Louise Barrett, said: “We are incredibly grateful to the Wayne Rooney Foundation for this donation which will help to fund personalised patient entertainment and distraction throughout our new hospital, ensuring children and young people are less anxious and nervous about receiving treatment. We are very proud of our long-standing relationship with both Wayne and Coleen and are excited about their plans to support Alder Hey through the Foundation during 2017. Together we can make a difference to the thousands of children who come to our hospital every year.”