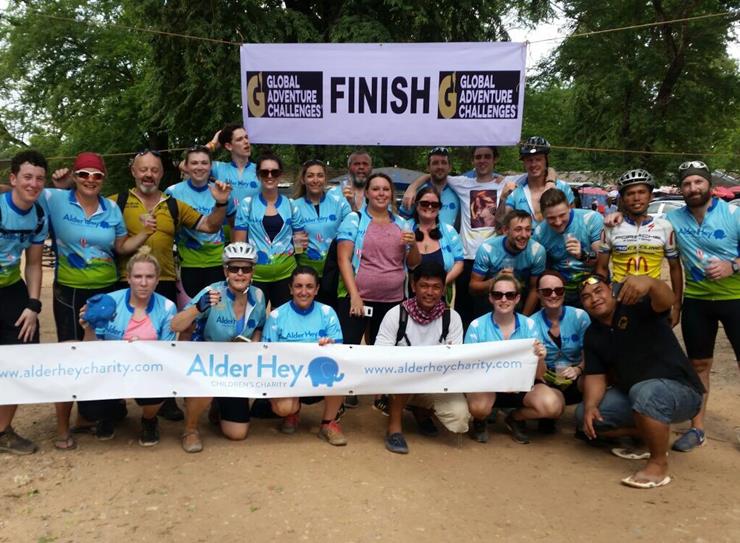 Having survived the overnight flight via Singapore and negotiated the seven million scooters of Saigon on Friday 13th, twenty one Alder Hey cyclists, fully kitted out with their suspension laden mountain bikes, set about their first challenge of the trip…staying awake long enough to negate any jet lag before an early start in the morning.

With the art of crossing the road on foot mastered…basically walk in to the traffic, don’t stop, hesitate or slow down (the traffic will go around you – just don’t try it at home kids!)…museums, markets and street masseurs were sought out, and the chaotic vitality of the city was embraced.

Several attempts at bartering and a couple of cupping therapies later, we set off for dinner accompanied by the most fabulous tropical thunderstorm and wondered whether this was a taste of the cycling conditions to come…

After a fitful night’s sleep but full of the breakfast delights of exotic fruits and freshly made omelettes we said goodbye to the fabulous chaos of Saigon and headed out of the city on bus to avoid certain demise by scooter.

Fascinated by the phonetics lesson given en route by our guide Hai, we travelled through tomb adorned rice fields towards our starting destination in the Mekong Delta armed with our new language skills.

Having learned that the word ma has six different tones and meanings, we left the bus safe in the knowledge that even if there was little fluency in our Vietnamese, we were all well equipped for the social faux pas of calling our mother a horse!

An initial two hour downpour gave way to hazy sunshine and interesting sunburn lines as we weaved our way through coconut shredding cottage industries and over slippery leaves - discarding occasional chaff inducing undergarments as we went.

As we rode deeper into the Mekong Delta, our delicate coccyx’s were soothed by the frequency and volume of the shouts of ‘Hello!’ from delighted local children– a truly magical and heart-warming welcome that was to become a theme across both countries throughout the journey.

Buoyed by the beaming local children, dusk settled and after 62km our first day in the saddle was over.

After a mixed day weather wise yesterday, today the sun came out, the temperature hit 34 degrees and the humidity hit a challenging 80%.

As we rode through banana plantations and paddy fields we experienced the simplicity and beauty of river life as we criss-crossed the Mekong Delta, sharing the narrow pathways with the occasional patient moped.

After becoming the first slippery leaf casualty on Day 1, Michelle’s $8 knee X-Ray gave her the all clear, and with her offending knee and elbow patched up, she was back in the saddle and allowing others (well…me) to fall off instead!

Having been warned that some dogs in Vietnam like to chase cyclists, we had initially been a little wary of the plentiful four legged friends lining the streets. Our fears turned out to be largely unfounded, as all but a couple were far less interested in us than the children they accompanied.

While the potholes, bridges and scooters we encountered provided us with a challenge and a little discomfort; the occasional ferry crossing, lily pond pit stop and widely available hammocks at lunchtime gave welcome relief from the saddle and ensured the group pushed on and smashed the 94km before darkness descended.

A super early start today meant we had the opportunity to take a pre cycle boat ride to visit the Cai Rang floating market and sample some of the freshest coconuts on the planet, and despite a forecast of thunderstorms, we saddled up our bruised sit bones in sunshine, and with a smattering of chafed buttocks, left Can Tho for Chau Doc.

Our final day cycling in Vietnam proved both tough and wondrous as we continued to weave our merry way through the mighty Mekong Delta; with Will industriously attempting to make birthday vermicelli noodles and Sarah ingloriously face planting on a bridge after encountering leaky Camel Bak issues!

The group communication skills were tested throughout ‘bridge day’ to avoid further incident as we traversed up and over hundreds of them in the course of our 80km route to relayed shouts of’ right turn’, ‘left turn’, ‘bike!’…’bridge!’

If communication skills were needed on the bike, it was our dance moves that came to the fore over lunch on our last day in Vietnam – when both Dylan C and Dylan W, birthday boy Will and wheelie king Michael accidentally ended up as the guests of honour at a local wedding!

On a day of celebrations it was fitting then that this was the day that Helen was called a movie star and Dominic became a celebrity ‘giant’ due to his 6’ 5” stature, a status that was only heightened by his admission at dinner that he had accidentally been taking paracetamol instead of his malaria tablets… at least he didn’t have a headache! 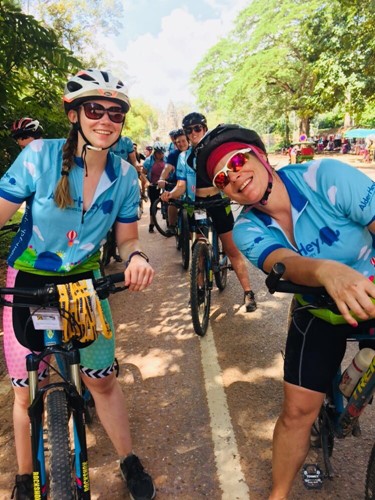 And so to Cambodia…

Despite today being a rest day from the bike, the 5.30am wake-up call was reluctantly accepted as we said an emotional farewell to our Vietnamese ground crew and headed for the boat to transport us four hours up the Mekong and Bassac rivers and on to Phnom Penh and the second half of our challenge in Cambodia.

The boat trip wasn’t exactly the ‘cruise’ that Katy had expected/hoped for, but the journey did give time for some well-earned rest and reflection and the chance to experience a first glimpse of Cambodia from a unique perspective.

As Phnom Penh eventually loomed in the distance everyone was ready to eat. The Bopha Phnom Penh Titanic Restaurant on the banks of the Tonle Sap River didn’t disappoint, particularly when Dylan nearly brought the house down by joining the live music performance on the roneat ek – a traditional Cambodian xylophone.

Suitably fed and watered, our next stop proved to be the most harrowing, haunting and horrific experience.

Choeung Ek is the site of one of the killing fields of Cambodia, the mass grave of 8,895 men, women and children brutally killed by the Khmer Rouge between 1975 and 1979, a genocide regime that killed almost 3 million Cambodians and lasted 3 years, 8 months, 20 days.

When our first experience of a Cambodian downpour hit us during the visit it was somewhat of a relief to get back onto the bus, we’d seen more than enough.

When Khmer Rouge dictator Pol Pot took his final stand, bringing his brutal regime to an end, the news was broken internationally by journalists reporting from the Foreign Correspondent’s Club (the ‘F’) in Phnom Penh – a watering hole of folklore, and a fitting place for us to dine and draw to a close an emotional rest day.

Back in the saddle after a day off, spirits were high and refreshed as we negotiated the early morning rush hour of Phnom Penh. Despite an early morning tumble Gill dusted herself down and after brief stop at the Royal Palace for photos with the pigeons we headed off over the Japanese Bridge and onward to Kampong Thom.

Vietnam had been hot, but in Cambodia the thermostat had been turned up a notch or two and it was a blessing to be moving on the bikes to benefit from the breeze that our newly found speed created!

The cheering squads of children, so abundant in Vietnam seemed to be twofold in Cambodia and as we stopped off to visit temples, and broke to eat our packed lunch on a pagoda with a Buddha – impromptu football matches broke out on the dust tracks lining our route.

The delight that bouncy balls, colouring books and Jacqui’s bubbles brought the children made the mud, sweat and heat exhaustion worthwhile, and as we hurtled along the final stretch of highway of the day we were delighted to discover that we’d made up enough time in our day to fit in a visit to the tarantula filled spider village of Skuon!

After a night of hotel room air conditioning battles and a somewhat ‘challenging’ breakfast, we started our penultimate day of cycling with a short transfer to what used to be the longest cobbled stone-arch bridge in the world – the ancient bridge at Kampong Kdei.

Armed with the knowledge that this was our last long distance day on the bike the group seemed galvanised. And inspired by our oldest member, 68 year old ‘Pambodia’ Pam we pushed through high definition picture perfect villages and orchards until stopping for lunch at a tranquil and resplendent riverside restaurant equipped with hammocks. What the other clientele and staff thought of twenty one sweaty, mud caked Brits in full lycra joining them for lunch is anyone’s guess!

Following a final short pit stop at a local high school, where we were greeted by the entire pupil population, we set off in search of the colonial city of Siem Reap and the Somedevi Angkor Hotel and its eagerly anticipated swimming pool which would be home for our final two nights.

With showers taken and hotel slippers and swimming costumes on - we hit the pool before heading into the City for food and the spectacular vision of Sarah slinging Will over her shoulders and squat lifting him to the cheers of the masses! 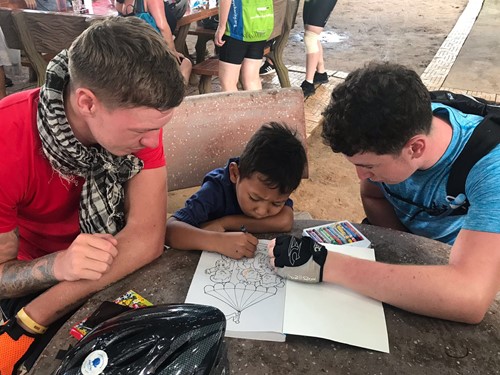 And so to our final 28km day of cycling…

A distance way shorter than any other day, but with conditions underfoot proving sandy, muddy and treacherous, and the heat and humidity rising still – it was a tough day and an emotional end as we crossed the finish line having arrived at the magnificent world heritage site, Angkor Wat.

Our travels had taken us through banana and coconut plantations, rice and sugar cane fields, orchards and river beds; via cities, towns, villages and markets bustling with cattle, dogs, pigs and most memorably amazing, joyous people with a never ending supply of smiles. To finish our journey at Angkor Wat was a fitting and magnificent climax to an incredible adventure.

As weariness took us, two by two we headed back to the hotel via tuk tuk to prepare for our final evening of the challenge and our celebration meal.

In keeping with the rest of the trip, the last night celebration, from Dylan rocking the Pub Street karaoke to dancing on the bar in the Cozy Pub, was fantastic, so much so that it prompted Nak, our Cambodian guide, to admit that it was the best night out he’d had in the eight years of guiding cyclists around his beloved country. 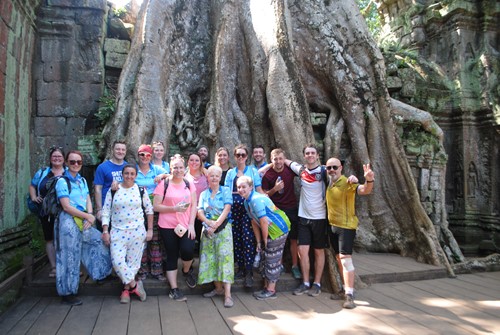 Allowing ourselves a slight lie in, we enjoyed  our final morning in Siem Reap sightseeing in tuk tuks and engaging in last minute market bartering over gifts for home before heading to the airport armed with a million memories and having raised over £60,000…Boom!