This year's exciting collaboration with Matalan and Alder Hey is finally here.

The campaign, #TogetherForAlderHey returns for a second year, exploring the core values behind the children’s charity as Matalan launches its seventh year of support for our amazing and world renowned hospital Trust.

The appeal aims to raise £3million to improve inpatient and community health services at Alder Hey, giving more children access to the treatment they need, when they need it thereby transforming the way mental health services are delivered to children and young people.

This year’s product range includes unisex adult and children’s PJs, a baby grow, pet outfit, a mug and a limited edition sleepmask, all with a colourful print made up of positive quotes as well as Alder Hey’s iconic Oli the Elephant mascot. The design is inspired by the importance of talking positively and aligned with the ‘7 in 10’ appeal, highlighting that 70% of young people with a mental health condition are currently missing out on vital mental health interventions as a sufficiently early age. 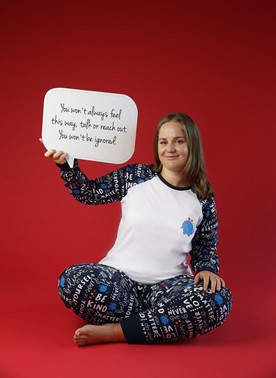 Taking centre stage in this year’s campaign is Lydia, 19. Lydia was almost 16 years old when she opened up to her mum and dad about her mental health after struggling with it for a while. She was referred to Alder Hey’s Community Mental Health Services after visiting her GP where she was diagnosed with OCD, anxiety and depression. Lydia says her diagnosis was a relief to her and marked the start of a long recovery. Thanks to the support she got, Lydia is now doing really well and was so inspired by her experiences at Alder Hey that she has now started training as a paediatric nurse.

“I absolutely love this year’s Matalan PJs. The different quotes featured on the PJs are so inspiring and I so hope they will encourage others to open up about mental health and have those conversations with friends and loved ones like I did.” Lydia, 2020 Matalan Campaign Ambassador

Along with Lydia, this year’s incredible ambassadors featuring within the campaign are a mix of Alder Hey patients and its remarkable staff including cardiac patients, Jake age 5 and William age 5 and clinicians; Lisa, Sally, Smita, Solange and Worthy.

“#TogetherForAlderHey those words couldn’t be more true right now. Over the past six months, we have seen our nation come together to applaud the invaluable and selfless work the NHS does, day in day out. I am immensely proud that we support not only one of the UK’s leading Children’s Hospitals, but the worlds – the work they do at Alder Hey is phenomenal, and it really is a special place. It makes me even more proud that we can help raise vital funds for such important campaigns like the 7 in 10 appeal, without doubt it’s been a tough year for everyone, but especially our children, which makes this appeal all the more significant right now.” Jason Hargreaves, Matalan

To show support for the hospital and this year’s campaign Matalan are asking people to share, donate and nominate; take a selfie using the #TogetherForAlderHey Insta filter and write a kind message to your younger self, text ‘TALKING’ to 70085 to donate £5 and nominate and tag five friends for them to do the same! Easy.

“We are so excited about this year’s #TogetherForAlderHey campaign. This is our seventh campaign with Matalan and we are incredibly proud and humbled by their continued support. Since 2014 Matalan has raised a staggering £3.2m for Alder Hey which has gone to fund a range of activities and projects that are designed to enhance and improve the lives of our amazing young patients. This year’s campaign supports our 7in10 Children’s Mental Health Appeal which will transform the way mental health services are delivered to children and young people.” Fiona Ashcroft, Alder Hey Children's Charity.

Head into store or online to shop the collection now: www.matalan.co.uk/charity/alder-hey/together-for-alder-hey