Tales from the Trek 2016: Grand Canyon 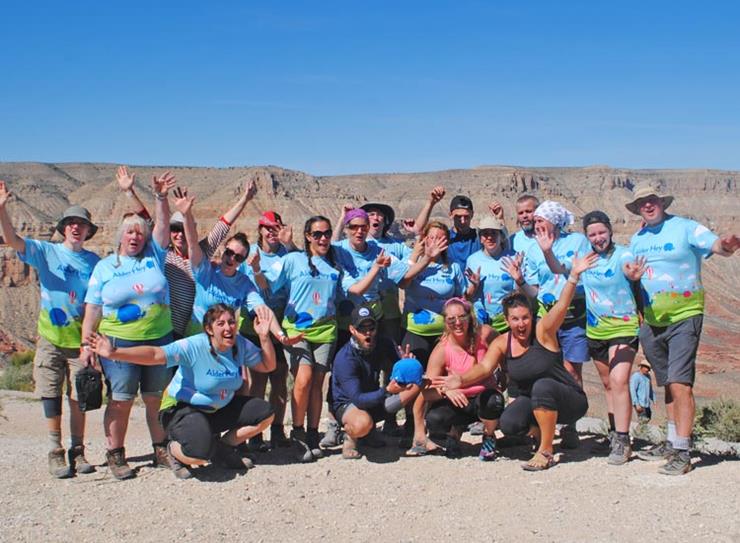 After incredible trips to China and India, our third overseas fundraising challenge took Cath Harding and a troop of intrepid adventurers to the wild west - Arizona in the USA - for a trek across parts of the Grand Canyon 97% of visitors never usually experience. This is her diary.

In October 2017 Cath will be cycling from Vietnam to Cambodia - will you join her for our fourth and most epic challenge yet?

It’s 9.00pm Arizona time and the Holiday Express hot tub is the perfect tonic for 16 bleary eyed travellers still on UK time after 24 hours in transit.

We’ve arrived in Scottsdale after leg one of our epic charity challenge and we’ve already laughed long and hard enough to produce tears and the occasional stitch. Toni has fully recovered from being sick on the plane and Steph and Kirsty are already sporting their Matalan striped pyjamas (have been since Washington airport) where, and I’ve only mentioned this couple of times, I was asked for ID in the airport bar (I’m 43…this is a big moment!).

An early night is needed with the promise of a good, peaceful sleep as tomorrow we head towards the Grand Canyon where our challenge really begins…

Soooo…the hopes of a good night’s sleep were misplaced! My body clock is all over the place, have been awake since 3.10am and it looks like I’m not the only one! Most have been awake for hours and a couple have ventured out for a middle of the night Denny’s.

By 8.00am we’ve worked out how to use the pancake maker and are loaded into two mini vans en route to Oak Creek for our acclimatisation trek. The views at Oak Creek give us our first appreciation of the vast, incredible landscape that we will encounter during the challenge.

We’ve been reminded (by pretty much everyone we’ve met!) that there are 27 different varieties of rattlesnake in Arizona, which perhaps explains Steph’s meltdown at mistaking a 10ft tree log for an anaconda sized reptile!

It has quickly become apparent that one of the biggest challenges of the trek will be the dry heat. That, and the prevalence of thousands of prickly, sticky critters attaching themselves to anything and everything…boots, socks, clothing…skin.

With our 5 mile warm up complete and all critters finally removed we devour our packed lunches and jump back into the van to head towards the iconic Route 66 and our final lodgings before our entry into the Canyon.

Cheers greet the turn that takes us onto the Will Rogers Highway, established in November 1926 and still one of the most famous roads in the world. It doesn’t disappoint. The sighting of the Arizona Hell’s Angels is only trumped by our arrival into Radiator Springs, the film set of Cars and our final destination for the day, the Grand Canyon Caverns (read Bates!) Motel!

The Motel, a fabulous throwback to the 1950’s has more than a slight Hitchcock feel to it and boasts ‘paranormal activity’ within. It can probably be best summed up by the note left in Charlotte and Clare’s’ room on a scrap of paper that reads, “Thank you for staying with us here in the middle of nowhere we appreciate it.  Housekeepers.”

If we’d had concerns about the 5.45am start, we needn’t have done! Whether it was the shock of trying to fit four days’ worth of kit, including sleeping bag, into a rather ungenerously sized brown sack, or jet lag – all 16 trekkers had been awake since 4.00am and were ready to bid Route 66 a nostalgic goodbye and head onwards.

Standing atop the North Rim of the Grand Canyon there is simply no getting away from its sheer scale and majesty. It is HUGE…and as we peered over the (vertigo inducing) edge, the scale of our impending challenge became a little clearer!

As we contemplated our 10 mile route down into the Canyon and to the Havasupai Reservation below, the dawning realisation that in four days’ time we would also have to climb out became evident on our faces!

The Canyon is vast and stunning. The seemingly ever-changing colour of the rock and the stark contrast of the green cactus provide an eerie, cavernous silence broken only by the clatter of horse train hoofs and the  occasional buzz of a helicopter overhead.

With tiring legs and sweaty brows we arrived at Havasupai Village, 2 miles from our final campground destination. Here we took the opportunity to send postcards home from the last post office in the US still serviced by mule train.

At Havasu Creek we then encountered our first sight of the fabulous, spectacular blue waters and waterfalls that the Havasupai reservation is famed for. Here we witnessed and cheered on a marriage proposal and, conscious of the lack of washing facilities for the next four days, many of us took the opportunity to take a dip in the fizzing waters of Havasu Falls. Any pre-conceived ideas of bath like temperatures were soon dismissed out of hand, the water was freezing!

After an amazing, tiring day we finally arrived at the campground to find that our tents were up, caterpillars had moved in and the composting toilets weren’t half as bad as some had first feared. Our evening meal, lovingly prepared by our US hosts, was polished off in style and after we’d washed up by the light of headlamp we settled back to admire a sky full of shooting stars before collapsing into our sleeping bags at 8.30pm.

It’s 6.00am and everyone’s up. More importantly everyone has finally had a decent night’s kip.

Steph and Charlotte have both survived their first ever night under canvas – and while it’s not the Ritz, neither have been eaten alive or even attacked by killer caterpillars or spiders…yet!

There are few better smells on the planet (certainly not roadkill skunk!) than the whiff of cooked bacon first thing in the morning.

After splashing around in Havasu Falls yesterday we were all looking forward to further water adventures today, however it would be fair to say that none of us had prepared for the 200ft vertical decent via cave, chain and ladder, into Mooney Falls!

The physical demands and mental strain were, for more than a few, singularly the most arduous and frightening challenge ever experienced. 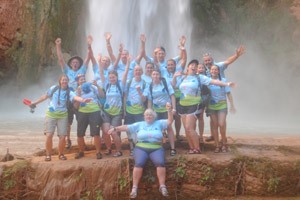 There are defining moments in all challenges that bring a group of individuals together as a team – Mooney Falls was that moment. The tears at the foot of the cliff told their own story.

Our onwards trek to Beaver Falls, wading through waist deep water (trying to keep Mark’s prosthetic leg from getting too wet with the aid of a couple of bin bags and gaffer tape) gave us all time to reflect and talk through our recent experiences whilst working through mental trials and tribulations in preparation for the return journey!

A combination of food, waterfall jumping and the appreciation of the sheer beauty of our surroundings, soon had everyone back in good, confident spirits and five hours after our descent we climbed, as one, back up the rock face and to safety at the top.

As the sun went down, the chill set in and we were all grateful for hot beef stir fry and for Toni’s marshmallow ‘s’mores ‘ around the camp ‘fire’ before another early night and the joyous anticipation of a little lie in tomorrow morning.

It’s 6.50am and the entire campsite is awake to the sound of hysterical screams emanating from Steph and Kirsty’s tent. They are under attack from a ‘giant’ spider and in their desperate attempts to get out of the tent are bouncing each other off its internal walls in an explosion of panic!

With the daddy long legs removed, calm is restored if not the long awaited lie in – and we settle down for breakfast and pack our lunches and backpacks ready for our third day in the Canyon.

Upper Navajo Falls is nature at its beautiful best and we were excited to get the opportunity to have some water fun and remove ourselves from our comfort zones by swimming under the rock formation into a snug waterfall cave.

After a further walk to Lower Navajo falls we endeared ourselves to other travellers and groups by donning our stripy pyjamas and jumping the 30ft off Navajo Falls into the deep pools below!

With camaraderie high we headed to Havasupai Village where the discovery of a WiFi signal outside the village shop, and therefore the ability to contact home for the first time in 4 days, sent spirits soaring even higher and gave everyone a much needed boost before our final day trekking and the task of getting ourselves out of the Canyon before the midday sun.

As our last night at camp descended upon us we prepared our kit in advance of an early hours start and bid an evening farewell to our friendly neighbours the chipmunks, the mice, the bats, the bark scorpion and 2Pac our adoptive campground  dog. 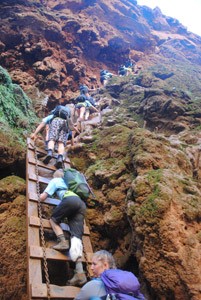 There’s less wondrous sightseeing and a little more grim determination and focus on the way out. We all have the same mission, we all have our own demons, we’ve all got to get through the Canyon, across the wash and up the hellish final climb.

If we needed any reminding of the harsh realities of the heat, of the challenge of the arduous, intense final ascent, it was provided by the sight of one young man being carried by his two friends to the top, barely able to put one step in front of the other and certainly unable to speak.

One by one the determined Alder Hey trekkers emerged over the rim, onto the top, and to the finish line. The tears flowed, the cheers got increasingly louder and the Canyon challenge came to an emotional, successful end.

A four hour sleep in the van to Vegas was soon an afterthought as the music was cranked, the singing began and the plans for the evening got into full swing…

A celebration meal in the Excalibur Hotel, a wander round the strip, a visit to the local tattoo parlour, a nightclub knees up and a couple of wins (and losses) in the casino drew this fabulous adventure to a close…

With flights home beckoning we enjoyed another early breakfast and bid an emotional farewell to a number of the team staying on for a few extra nights in Sin City.

And this is where the blog ends because quite frankly there’s nothing more to add other than THANK YOU to each of the remarkable people who joined the Charity on this adventure of a lifetime – you were all amazing!

Inspired by this adventure? In October 2017 Cath will be cycling from Vietnam to Cambodia - will you join her?