Royal Approval for Alder Hey in the Park 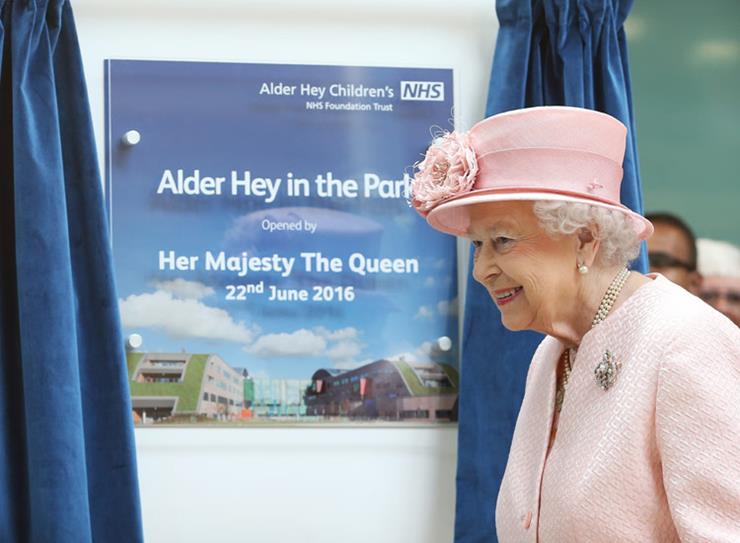 Alder Hey in the Park has been officially opened by Her Majesty the Queen and the Duke of Edinburgh, during an historic and unforgettable day at the specialist children’s hospital.

Hundreds of well-wishers including Alder Hey patients, families and staff gathered outside the hospital entrance and waved Union Jack flags to welcome the Queen and the Duke to the new Alder Hey.

Alder Hey moved into a new hospital ‘Alder Hey in the Park’ in 2015. Europe’s first hospital in a park, the new facility provides a purpose-built, unique and world class healing environment for children and young people. Inspired by children and young people, the new Alder Hey in the Park has 270 beds, including 48 critical care beds for patients in Intensive Care, High Dependency and Burns, together with 16 digitally enhanced operating theatres.

Thanks to the generosity of our donors, Alder Hey in the Park includes many enhancements that otherwise would not have been possible to include.

Alongside the new hospital, Alder Hey has also built an innovative research, education and innovation centre called the ‘Institute in the Park’. The new facility will place Alder Hey and Liverpool as a national and international leader in the development of safer and more effective medicines for children and young people. It will allow researchers and clinicians to work with industry to develop safer, better medicines and therapies for children to use in the NHS and throughout the world.

Before entering the hospital, the Queen was presented with a posey by two year old patient Lewis Connett. Lewis, a Young Ambassador for Alder Hey who has helped raise thousands for the new hospital, has been making the regular journey from his home in Halifax to Alder Hey since he was diagnosed with Apert Syndrome when he was a baby. So far, Lewis has had four surgeries at Alder Hey with his first at only five months old.

Apert Syndrome is a genetic disorder that causes abnormal development of the skull and affects other areas of the body but craniofacial surgery can help correct some of the problems that result. Craniofacial surgery is a specialist area of surgery managing conditions in the head and skull, including the eyes, face, jaws and teeth, the nose, throat, neck, and ears. Alder Hey is one of only four hospitals in England and Wales who have the required infrastructure, expertise and experience to treat these rare conditions.

Lewis was overcome with shyness as he presented his posy of yellow and pink carnations, roses and sweet peas. After passing the Queen his flowers, Lewis ran to his mother Donna’s arms. Speaking afterwards Donna said the Queen had told her there was “no need to worry”.

She added: “She was really nice about it. Obviously it was a bit much for Lewis but it was a privilege and an honour to come and give her flowers. When we first started coming to the old hospital the staff were amazing but now they have moved over here, as well as the staff being amazing the hospital is as well. It doesn’t feel like you are coming to a hospital, you are coming somewhere where they really care for you.”

The Royal Party then began a tour of the new hospital accompanied by Alder Hey Chair Sir David Henshaw and Chief Executive Louise Shepherd. Beginning with a visit to the Outpatients Garden (funded by the Steven Gerrard Foundation), they listened to Alder Hey’s Staff Choir perform while meeting children involved in the design of the hospital. Children and young people have been involved in designing the new hospital since an initial consultation back in 2009, where almost 1000 patients drew pictures and shared their views on what their new hospital should look like. Alder Hey’s Children and Young People’s Design Group have had their say throughout the design process on everything from the colour of the rooms, to the artwork displayed in the new hospital and what their wards should look like.

The Queen and the Duke then continued to the hospital’s Oncology and general medical wards. On ward 3C, patients and families greeted the Queen while enjoying a Royal Tea Party especially prepared by Alder Hey’s ward chefs. The hospital has a unique food offering; chefs are based on every ward and are able to make fresh food on demand for patients as and when they want them.

The Royal Party concluded their tour in the hospital atrium, where they were introduced to major donors of Alder Hey Children’s Charity who have helped fund lifesaving equipment, vital research and arts and play activities in the new hospital.

Watched by dozens of staff, patients, families and supporters of the hospital, Sir David then invited the Queen to unveil a plaque and officially open Alder Hey in the Park.

Speaking after the Queen unveiled to the plaque to commemorate the hospital’s official opening, Sir David said: “It’s been a really fabulous day for Alder Hey and it is the start of a long journey. Her Majesty was absolutely superb with patients and staff and was so interested in what we are doing and how unlike an ordinary hospital we are.”

Louise Shepherd, Chief Executive at Alder Hey Children’s Hospital: “We are honoured that Her Majesty the Queen officially opened our new hospital; Alder Hey in the Park. We are extremely proud of the new Alder Hey, the first hospital in a park in Europe and one which has been designed with the help of our children and young people. The last year has been such an exciting time for everyone here at Alder Hey and we feel very privileged to have had the chance to show our brand new home to Her Majesty the Queen and the Duke of Edinburgh.”

Jamie Carragher said: “Via my 23 Foundation I have been honoured to support Alder Hey in its fantastic efforts for the children and young people of the area. The 23 Foundation has specifically supported new ultrasound rooms, a sensory garden and the Neonatal “Virtual Visiting” Project, and I’m looking forward to seeing it all place at the Opening. Having been taken care of by Alder Hey when I was born I know how Alder Hey can give children needing support the greatest start in life – they are brilliant!”