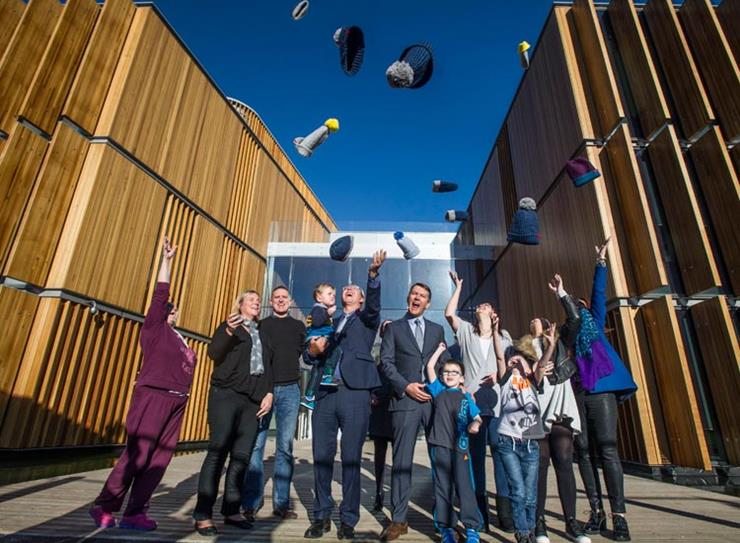 Matalan, one of Britain’s best-loved family businesses, has presented Alder Hey Children’s Charity with a cheque for £620,580 at the hospital’s brand new research and innovation centre.

This Christmas, the nation was asked one question by Matalan: “Are you a Beanie or a Bobble?” and Matalan sold more than 157,228 hats in stores nationwide with 100% of profits going to Alder Hey.

The hats, which came in six different colourways in both bobble and beanie styles
were worn by almost 100 celebrities including Britney Spears, Abbey Clancy, Will
Ferrell, Kylie Minogue and Matt Le Blanc.

The family retailer, started by the Hargreaves family in Preston in 1985, raised more than £650,000 for Alder Hey last Christmas with its ‘Alphabet Scarves’ campaign and has thus raised over £1 million for the charity in total so far.

Jason Hargreaves, Managing Director for Matalan said: “We are delighted to present Alder Hey Children’s Charity with a cheque for over £620,580 for the second year running. The hugely successful Beanie vs Bobble campaign followed on from last year’s incredible Alphabet Scarves Christmas campaign and has enabled us to provide more than £1m of support to Alder Hey."

Louise Barrett from Alder Hey Children’s Charity said: “We have been overwhelmed by the generous support of Matalan and its customers in raising such an incredible amount for Alder Hey. Everyone at Alder Hey has really enjoyed taking part in ‘Beanie vs Bobble’ and it’s been great to see so many of our patients, families and staff getting involved in such a fun campaign."

“Every penny of the money raised by Bobble vs Beanie, together with the funds from last year’s ‘Alphabet Scarf’ campaign, will go towards Alder Hey’s new state-of-the art research, education and innovation centre.

The Centre will position Alder Hey as an international leader in the development of safer and more effective medicines for children. The first phase of this facility has been built alongside our brand new hospital and the funds raised by Bobble vs Beanie will contribute towards furthering this development.

Thank you to everyone who supported this campaign and for
helping us build a healthier future for children and young people.”