A brave youngster from St Helens, who had been unable to walk, has completed a charity trek without the need for a wheelchair; and all to raise money for Alder Hey Children’s Hospital. 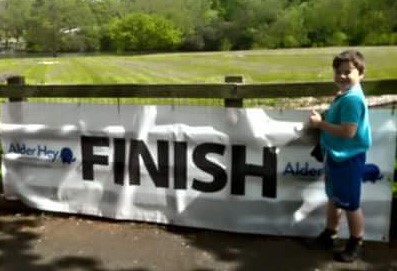 As we reported earlier this month, 8 year old schoolboy Kenzie Appleton suffers from Perthes disease, a hip disorder which had left Kenzie confined to his bed. But Kenzie was on hand to conquer a three kilometre trek through Knowsley Safari Park, with a little help from his friends and family, including Oli the Elephant.

Oli’s Safari Walk is an annual event in which young Alder Hey patients and their families get up close and personal with the really wild residents of Knowsley Safari Park to raise money for life-saving technology, research and equipment for our all new hospital, Alder Hey in the Park.

Kenzie was diagnosed with Perthes disease at just four years old, leaving him unable to enjoy things that other kids his age take for granted, like playing with friends and kicking around footballs. But in spite of this the youngster defied expectations by completing the entire safari walk unaided, as mum Tara and dad Ste looked on.

In doing so, Kenzie has helped to raise money for Alder Hey with his remarkable effort and he wasn’t the only one. We are proud to report that the Safari Walk 2015 was a massive success, but don’t take our word for it, take a look at what our supporters had to say on Twitter:

@AlderHeyCharity Thank you for a great day at Oli's Safari Walk - here are Corey and Connie with their certificates! pic.twitter.com/bUMLwggveN