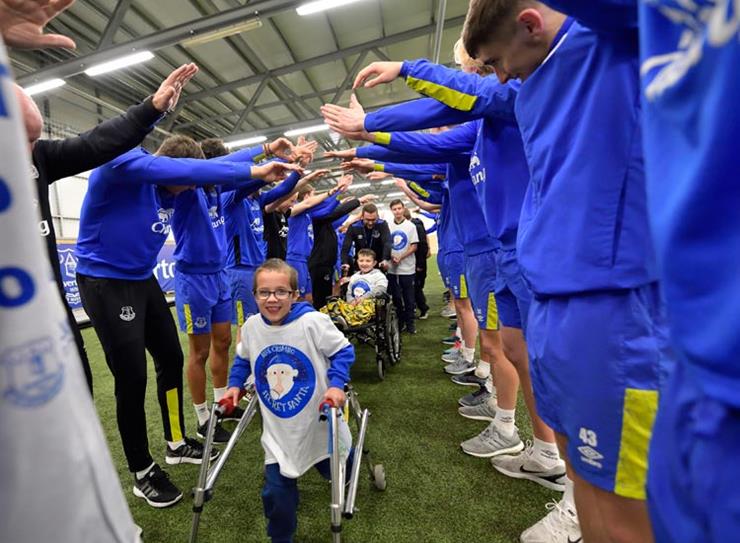 Christmas came early for a group of inspiring patients from Alder Hey Children’s Hospital when Leighton Baines treated them to a surprise trip to Finch Farm.

Baines, an official patron of Alder Hey Children’s Charity, arranged for the youngsters, aged six to 18, to go on a tour of the facility and watch the first-team being put through their paces by Ronald Koeman before joining them as they took part in their own training session with coaches from Everton in the Community.

The group were only given news of the surprise experience minutes before they were boarding coaches to begin their journey to Finch Farm – courtesy of a video from Baines played to them at the new Alder Hey hospital.

“It’s a great day,” said Baines. “As players, we take as much from things like this as we give.

“It’s something we all take seriously, the work that we can do and the things we can do within the community to help. As a Club, we have a strong relationship with Alder Hey at this time of year, obviously, but beyond that as well.

“You hear their stories and you read a little bit about the kids before you go into meet them and you expect to go in and see that they’re really struggling and maybe not in good humour. But you walk into the opposite. They’re bubbly, full of positivity and it’s tough not to be inspired by that.

“I’ve been chatting to a couple of the parents and they said how the kids’ faces lit up when the players came in and joined in a little game of football with them and it’s those things that can be priceless really.”

The young Evertonians had each been nominated by the hospitals’ doctors and nurses, who felt they deserved an extra special treat this Christmas after they had been so strong and brave throughout the year.

John Armstrong, Director of Philanthropy at Alder Hey Children’s Charity, said: “The trip to Finch Farm is a really exciting opportunity for the children to come and see the first-team train. Some of these patients are our long-term patients who have been treated with us for many years so it’s a great opportunity for them to get out of the hospital, to get into a new environment and see some of their heroes.”

One of the young Blues chosen for the special day out was seven-year-old Harry, who has been treated at Alder Hey since he was just seven months old after suffering from meningococcal septicaemia. He has had multiple surgeries including limb reconstruction and is currently undergoing extensive physiotherapy and hydrotherapy to help him walk.

Speaking about his special day, Harry said: “Everyone who has come here today, they love Everton and they are going to be in hospital around Christmas time so that’s why we’ve come to the Everton practice.”

Lisa, Harry’s mum, said: “After seeing everything he’s been through, it’s just being able to see him get the enjoyment and getting involved with other kids. He’s had to be off school a lot so seeing him getting involved and so happy makes you happy too.”

Everton have shared a special relationship with Alder Hey for many years and staff from the Blues’ official charity work at the hospital every single day to deliver fun activity sessions to sick and disabled children, engaging with around 1,500 patients each year. The workshops provide a much-needed platform for social interaction and laughter that breaks up the tedium of long-term hospital care and eases children’s anxieties about treatment.