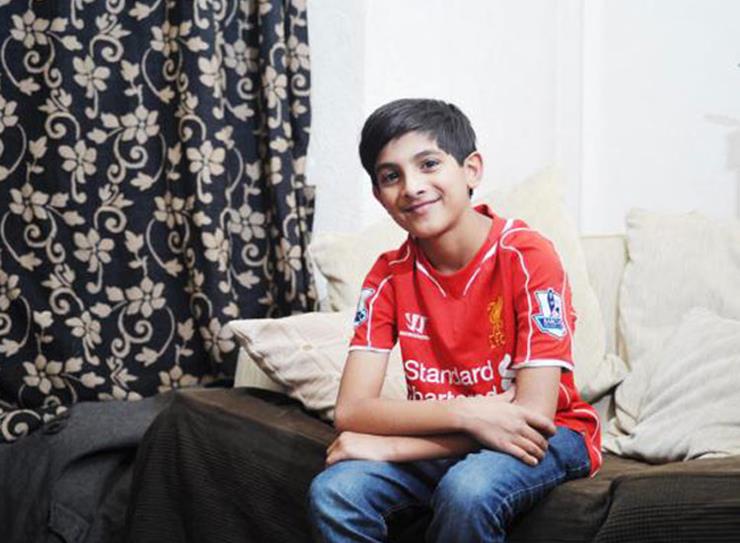 Blackburn youngster Huzaifah Valli was asked to play a special role at an All Star charity football match at Anfield last Sunday. Liverpool FC fan Huzaifah was a Ball Boy at the charity game, organised by the Liverpool Foundation to raise much needed funds for charity.

Alder Hey Children’s Charity is one of the main beneficiaries of the match, which involved huge names from the world of football including Xabi Alonso, Luis Suarez, Fernando Torres and Pepe Reina.

Huzaifah was asked to represent Alder Hey in his role as a Young Fundraising Ambassador for the day. He was joined at the game by a number of other Alder Hey patients and families who were given free tickets for the game by the club.

Eleven year old Huzaifah was born with a heart murmur in 2003 and was immediately rushed to Alder Hey Children’s Hospital. Doctors at Alder Hey soon diagnosed complex congenital heart disease. He had Transposition of the Great Arteries (the two big vessels leaving the heart were the wrong way round), a large Ventricular Septal Defect (a hole in the wall between the right and left pumping chambers of the heart) and a straddling heart valve (the valve which should just be on the left side of the heart was in the middle instead). Huzaifah has had several operations to repair his heart and has spent a large part of his life in Alder Hey.

Huzaifah was recently asked by Alder Hey Children’s Charity to be a young ambassador for a major fundraising appeal, aiming to raise vital funds for a new hospital Alder Hey in the Park.

Huzaifah said: “I was really happy to be asked to be a Ball Boy at the game and I was really excited about being at Anfield on Sunday. Alder Hey has always tried to fulfil my dreams and I am very grateful for that. Because I can never be a footballer this was a great opportunity and also it’s a dream to be a ball boy for my favourite team!”

Liverpool favourites Steven Gerrard and Jamie Carragher are both Patrons of Alder Hey Children’s Charity and managed the teams on the day. Both have already made significant donations to the £30m appeal and this match further highlights the close relationship between Alder Hey and Liverpool Football Club.

Clare White, Director of Alder Hey Children’s Charity, said: “We are delighted to be chosen as one of the charities to benefit from such a fantastic event. Alder Hey is set to open the doors to its new hospital in September and charitable donations will help us to make it one of the best children’s health facilities in the world. Alder Hey has a long standing partnership with Liverpool Football Club and we are incredibly grateful to all the LFC family for their continuous support. Together we can make a difference to thousands of children and young people in the city of Liverpool and beyond.”

Liverpool legend Jamie Carragher said: “I spent the first few weeks of my life in Alder Hey so they have a really special place in my heart.  I’ve been lucky to be able to visit the hospital many times over the years and hopefully help cheer up some of the patients and their families. The children are fantastic and so brave. Some of them are facing real challenges and difficult times but the way they deal with things is an inspiration. The city of Liverpool is incredibly lucky to have Alder Hey on its doorstep and the new hospital will be fantastic. I’m extremely proud to be able to support Alder Hey in any way I can and hope football fans across the city can do the same.”

“We hope that Huzaifah had a fantastic day on Sunday and enjoyed his experience at Anfield.”