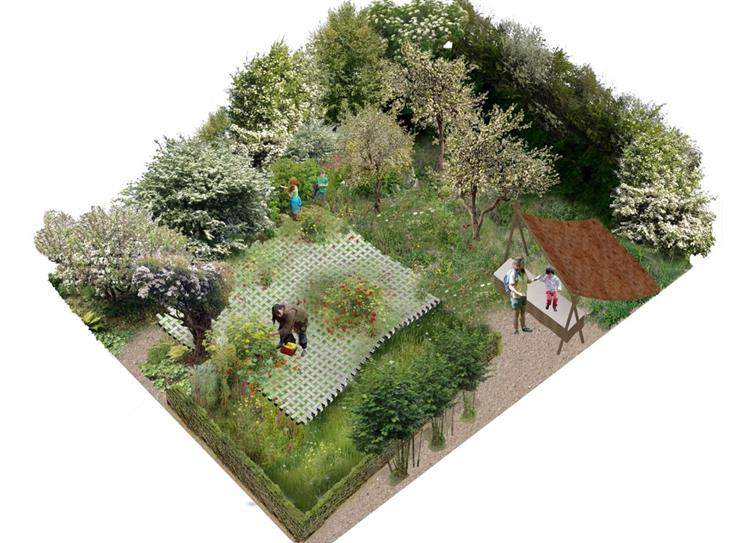 Award-winning designers, Hugh and Howard Miller of  H. Miller Bros are delighted to announce that their ‘Alder Hey Urban Foraging Station’, designed for Alder Hey’s Children’s Charity (Reg. Charity No. 1160661) in Liverpool, will be first showcased at the RHS Chelsea Flower Show between 24-28th May 2022 before being relocated at the children’s hospital as a permanent feature to benefit patients and their families.

The garden is mindful of children’s mental and physical health and is designed to encourage engagement with nature through foraging, sharing healthy food, play, relaxing together and being in the moment.

About the Alder Hey Urban Foraging Station
Designed by brothers Hugh and Howard Miller, the Alder Hey Urban Foraging Station is a woven landscape; it is about weaving together the young and old, green and urban, play and learning and Alder Hey Children's Hospital with its community. At its core is the aspiration to inspire children to lead active, healthy, pleasurable lives. The garden is infused with the magic of discovery inherent to foraging. Visitors first encounter the garden as nostalgic glimpses through rampant, blossoming hedgerows. Within, a sense of freedom prevails; explore, 'leave the path', get lost in your own world. A design language of woven forms associated with foraging are abstracted into a woven landscape. Precast concrete 'strands' make up a picnic blanket laid over an undulating landscape with edible herbs growing through.

Designer, Howard Miller said “We were really keen to work with Alder Hey to make a garden that celebrates the amazing work they do supporting children and their families. We’re a family business, local to the Hospital and many of our family and friends have benefited from Alder Hey’s care; they’re a big part of our community. It’s a real privilege too that we can move the garden back to Alder Hey where it will become a living resource for children and medical practitioners to use for social prescribing and other informal therapies.”

The importance of mental wellbeing, particularly in children, has been thrown into the spotlight during the pandemic and although this garden is outwardly about foraging, it uses this theme to address the issue of children’s mental wellbeing in an accessible and light touch way. The NHS’s 5 steps to mental wellbeing are all facilitated within the garden. These are: connecting with people, being physically active, learning new skills, giving to others and mindfulness – paying attention to the present. The whole ethos of the garden reinforces this theme, from the way things have been designed with the child at the centre, the feast of opportunities to learn and pass on knowledge about forgeable plants and bush crafts to the mindfulness intrinsic in some of the hand-crafted features.

The planting scheme is drawn from species naturalised to the UK, that flower in late May and provide a contribution as forage to the garden’s users. The garden is not intended to be a re-creation of pastoral scenes of yesteryear but rather a stylised remembering of orchards, meadows and blossoming hedgerows. It is intended to awaken the excitement of exploring a new rich world packed full of edible wild goodies to discover. The colour scheme is inspired by apple blossom; whites, creams and blush pinks.

The Alder Hey Urban Foraging Station Garden is one of 12 Show Gardens at RHS Chelsea Flower Show 2022 that has been funded by ‘Project Giving Back’ to promote good causes while supporting the horticultural industry.

Journey to Alder Hey Children’s Hospital, Liverpool
The garden will be relocated to the Alder Hey Children’s Hospital campus in the summer of 2022. It will be positioned just outside the entrance to Sunflower House, a new building dedicated to children and young people’s mental health services, which is due to open in the spring of 2022 and forms part of wider plans to create a unique paediatric healthcare campus.

The garden will become an integral part of the healthcare campus and the green spaces that connect a cluster of state-of-the-art facilities. These include: a state of the art, specialist digitally enabled children’s hospital, The Speakman Building (dedicated research, education and innovation centre), the Alder Centre (specialist bereavement centre), a brand new surgical Neonatal Unit, The Catkin Centre (community services) and Sunflower House (devoted to children and young people’s mental health services). Sunflower House will be a state-of-the-art development which includes mental health outpatient facilities and a brand new twelve bed specialist inpatient mental health Unit.

The Charity’s 7in10 Appeal was launched in Spring 2020 by Shirley Ballas to raise funds for this new building and bought attention to the fact that 7 out of 10 children and young people who experience a mental health condition in the UK do not get appropriate interventions at a sufficiently early age. This new unit addresses that by enabling more children to access the treatment they need at the time they need it.

Key Features of the garden:
Weaving Theme - There is a common thread of ‘weaving’ throughout the garden such as within the picnic blanket, baskets, mobile foraging kitchen and tools. A switch of material was needed for the picnic blanket feature, as this element needs to perform outdoors in all climates, so it was made from glass reinforced concrete which allowed H. Miller Bros to create the ripples and folds of a blanket.

Mobile Foraging Kitchen – Containing all the delicate tools, the Mobile Foraging Kitchen is easily movable to wherever the ‘seasonal foraging’ is taking place. H. Miller Bros borrowed the concept forms of a wheelbarrow and a picnic hamper to create the Kitchen which can be arranged to make a child friendly base.

Edible Garden - The garden is full of plant species such as crab apple, rose hip, elderflower, wild garlic, mushroom, water mint and poppy seed that can be foraged for eating, processing, drinking, making natural dyes, or even using for bush crafts. Growing through the picnic blanket, H. Miller Bros will include a mixture of scented, culinary herbs.

Mental Health & Wellbeing - The NHS’s ‘5 steps to mental wellbeing’ are embedded into the design and the garden will be relocated to a spot near the entrance of Alder Hey’s new purpose-built building devoted to children’s mental health services – Sunflower House.

Learning to care for our Natural Environment - The garden features planting inspired by a number of habitats that were once commonplace but can no longer be taken for granted such as rich hedgerow, orchard meadow and bog/ditch habitats. By relocating the garden to the Alder Hey campus, it sets up a safe space for children to dip a toe into the world of foraging, whilst opening the door to a deeper understanding of the natural environment.

Sustainability – The garden uses timber extensively, the ultimate low impact material. Drainage from the garden is via a bog environment so that surface run-off can be returned to the water table without going through mains sewers. The planting pallet is restricted to native and UK-naturalized species. Even the concrete used to make the picnic blanket feature is made from a low carbon, light weight concrete to minimize its impact.

Howard Miller
Howard is a designer, architect and landscape designer. After graduating from Glasgow School of Art and the Bartlett School of Architecture, Howard has practiced in London and New York. With an approach to design that combines man-made and natural elements, Howard creates tactile, beautiful and elegant spaces that are a delight to live in.

Hugh Miller
A master woodworker, furniture maker and designer, Hugh's passion for wood as a material started when he was young. He made his first piece of furniture at 15 and, after earning a Master's in Architecture at the University of Sheffield, founded his first workshop in Liverpool at the age of 24.

Hugh is a Winston Churchill Memorial Fellow, travelling extensively in Japan for his research study on Japanese wood craftsmanship. He is hugely passionate about design and has lectured widely on the subjects of Japanese design, furniture and its relationship to architecture, and making as a design process.

H. Miller Bros
H Miller Bros was founded by the brothers in 2019 as a holistic design and make studio, specializing in high-end interiors in wood. From single pieces of furniture to kitchens and whole building interiors the bothers are attracted to projects with that require high levels of invention, craftsmanship, thoughtfulness and articulation.

The brothers have been designing and making together since childhood, blending their highly acclaimed architecture and furniture making skills. Each project is made by hand in their workshop located in Liverpool’s creative district, The Baltic Triangle. The studio recently won ‘Kitchen Design of the Year’ at the Designer Awards for their ‘Furniture Maker’s Kitchen’ design and the 2021 KBB Review ‘Design of the Year’ Award for their Seaside Kitchen.