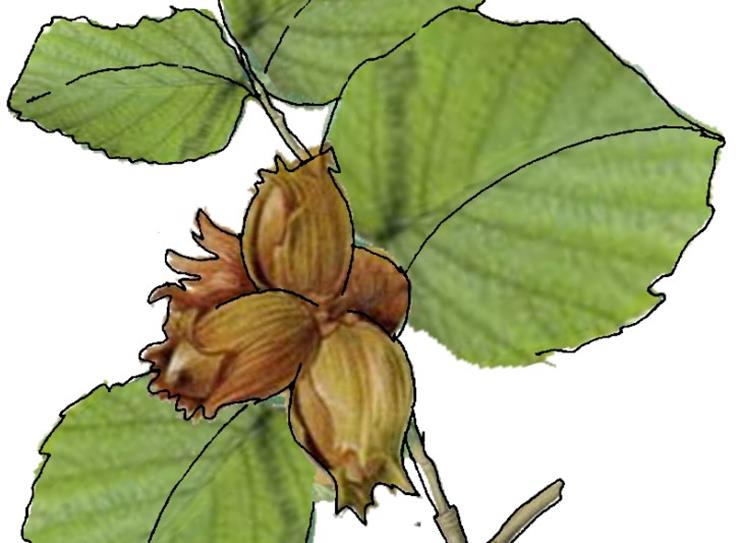 A really significant component to our garden is the hedge that wraps around the back and sides of the garden to surround a secluded spot for the picnic blanket.

It is far more than just a backdrop; hedges are probably one of the best foraging situations because they span a range of different habitats from top to bottom.

When we were researching for the garden last May, we took a trip to the Llyn peninsula in Wales because the hedges there are so incredible. The lanes are sunken a bit with great earth banks full of ferns, grasses and wild flowers that gradually merge into a hedge that extends up and sometimes over the road to create a kind of ‘hedge tunnel’ effect. Occasionally, you get a spot where a cow has eaten a window through the hedge and is peering down at you through it. We took a lot of photos to create a long-list of plants to draw from as the garden design developed. One of the signs of an ancient hedgerow like this is the sheer number of different species making up the hedge and this is something we wanted to simulate.

As part of the process of applying to do a garden at Chelsea, there is a point where the design is scrutinised by a selection panel who often have comments that are both really useful and slightly intimidating! With this garden, their main comment was “your trees will need to be perfect..." What they meant by this is, the trees would need to look mature, authentically bushy and gnarled, be in prime condition, and be exactly the right species to make up an authentic hedgerow.

To source trees like this we approached various specialist tree nurseries here in the UK. What we found was that because the species of tree we were looking for were generally classed as utility trees (i.e. for agricultural use, filling in hedgerows etc.) they weren’t available as larger, mature specimens.

As a generalisation, the UK doesn’t grown anywhere near the amount of trees we use in landscaping and public realm works; they are grown in a sweet-spot around Belgium, the Netherlands and northern Germany and imported into the UK. There are some very good tree nurseries in the UK growing trees from first principles but they are few and far between and they tend to focus on the best sellers: large natives like oak, beech and various pines, and garden ornamentals. Growing trees for sale is a very long term investment; what a grower chooses to plant and nurture now might not be ready for sale for another 10, 20 or 30 years…so it makes sense to focus on what is most likely to sell.
We spread the net wider and had a great response from a nursery in northern Germany called Bruns who have been operating since 1876 and are known for an extensive range of available species and for the large size of their trees. They had all of the trees we needed in a choice of sizes and shapes.

It is really impossible to buy a tree like this over the internet on photos alone. We needed to go and pick out the trees but during 2021 cross border travel was being locked down because of the pandemic. We watched and waited as UK cases dipped, they were doing the opposite in Germany, then it was the other way round. In September, we were running out of time because a few weeks more and the trees would drop their leaves making it so much harder to pick out good specimens. Finally, in early October 2021, a window opened up where both countries were letting people in and out and we were able to go out to make our selection.

The most technically difficult part of the design was to create the ‘hedge tunnel’ effect into the garden. To do this, we planned on using an ‘umbrella form’ tree (a tree that has had small branches removed from its trunk as it grows and then allowed to develop lateral branches higher up to make a canopy in the shape of an umbrella) and to combine this with two other trees of the same species grown as bushes and pushed up either side of the umbrella. 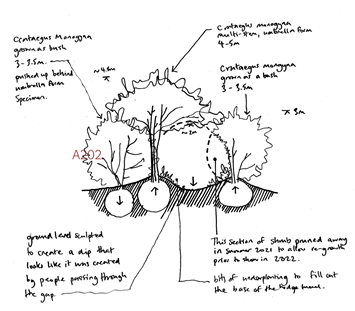 Specimen trees can be grown in large pots but only up to a certain size. More usually trees are grown in fields, in the ground, and are lifted and moved every other year to prune its root ball and keep it compact so that it can be transplanted when it is sold. Trees like this can only be moved in the dormant period between November and February.

A complication of importing trees is obviously plant health. The nursery industry uses a plant-passporting system to track the movements of plants across borders. UK nurseries receiving imported trees need a licence to do so and to be inspected at various intervals. The RHS have additional rules for trees used in their shows too. All this meant that we needed to find a partner nursery in the UK that could receive the trees, put them into pots, water them, and do all the necessary paperwork to import them. We are eternally grateful to Specimen Trees in Knutsford for going above and beyond and agreeing to help us with this.

The trees were moved to Knutsford in December 2021.

Mark Earle at Specimen Trees very kindly helped us mock up the garden and to prune the hedge tunnel effect into some of the trees. The trees are now all growing in pots and are currently being prepared for the show.

In the run up to Chelsea we are publishing a series of personal blogs from Howard and Hugh Miller, the designers, plus behind the scenes videos and even a few recipes, to help showcase the immense amount of work that goes into planning and creating what is bound to be an award-winning garden at this year’s Chelsea Flower Show!

Read all of our Chelsea BLOGS