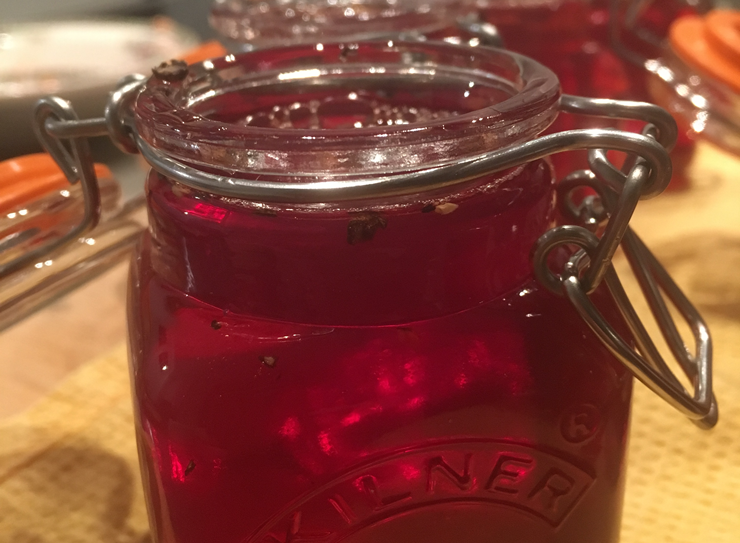 Susie is designer Howard's mother-in-law, Granny Soos to Frank and Lil and an avid forager. In this road-to-Chelsea blog Susie recollects creating her summer kitchen in her Scottish garden and shares some of the foraged delights she will be bringing to the RHS Chelsea Flower Show 2022. 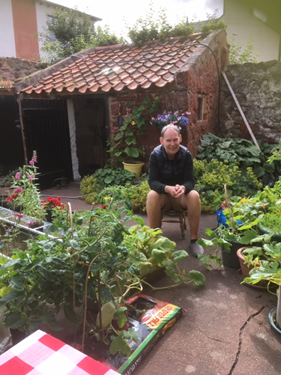 I have an old shed in my garden in Scotland; it’s pretty - red sandstone walls and red pantiled roof. We reorganised it two years ago at the beginning of lockdown, having emptied the little building of the unused detritus of my family’s life including paint, creosote, linseed oil, old tools, hooks, twine, fire irons, ancient pots, even scuttles complete with coal, a shoe repair anvil.

Tucked away on a highish shelf were my Mother’s ashes, placed there as agreed unanimously by the family on account of her love of her garden and all things plant. Coming across the urn got me to thinking about her. She was such a maker - jamming, bottling, pickling, and of course gathering food for free. She filled her shopping basket with brambles every year for puddings, pies, dumplings, jelly. Excursions to the nearby Lammermuir hills gave us blaeberries, surely the finest subject for her legendary suet dumplings. Her pantry was filled with home bottled tomatoes, plums, gooseberries, blackcurrants, piccalilli, pickled onions, pickled cabbage, chutney, sweet preserves.

My father and I got into mushroom hunting in the 1970s. Memories of those field mushrooms freshly picked and cooked in butter with a bit of bacon, served on my Mother’s home baked rolls gave us what my husband Chris calls the best breakfast he has ever eaten. We confidently harvested chanterelles, blewits, parasols, ceps and savoured them in her culinary creations. 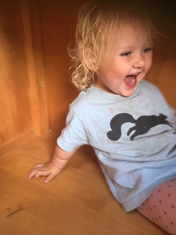 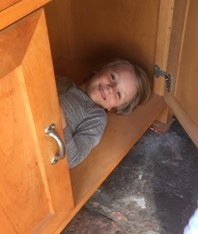 My more recent inspiration for making my shed into a ‘summer kitchen’ came from the Ukrainian cook based in East London Olia Hercules - a 2020s queen of fermenting, pickling, cooking the produce of the land. Maybe the Ukrainian country tradition of having an outbuilding where these culinary pursuits could happen, and for storing the results for future consumption could be a ‘thing’ in a small Scottish town by the sea. And so it began - shed cleared, cleaned up, the stone floor scraped clean and the two old kitchen cabinets brought down from the loft to store the utensils, jars, bottles lids and containers. We added hooks to the wooden beams, straightened the shelving, all very shabby chic. My grandchildren, Frank and Lil just loved those cupboards. 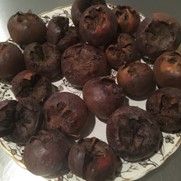 Howard's father Tom arrived here in September with a big box of medlars from his beautiful tree at Rose Cottage. One time before I was completely successful in the bletting, or rotting, phase which is necessary before the fruit can be processed. So last autumn I carefully placed Tom’s fruits on an enamel tray (my Mother’s of course) and put it into the greenhouse the fruits could blett. Alas, it was not to be. Instead of softening and browning most of the little fellas shrunk and hardened into leathery golfballs which have gone straight into the compost bin. I have kept a few soft-ish ones, however, and they are on my kitchen window sill now, in the hope that I will manage to salvage a couple of little pots of medlar jelly from them in time for Chelsea.

I last made medlar jelly about five years ago, with fruits from the same source. The wondrous thing about medlar jelly is frankly neither its taste (sweet but underwhelming) nor its (absent) fragrance, but its wondrous colour. These little brown objects actually render a jelly that is a deep, shiny, translucent shocking pink.

I have a special love for quince. Some 25 years ago we came upon a tiny quince paste (marmalada (Portuguese) or membrillo (Spanish) shop in the centre of Porto where you could buy a cake of the slightly gritty jelly-jam which the shop ladies turned out in front of your eyes from china bowls with a blue design. A slice with some ancient Portuguese cheese - now that’s perfection. Our neighbours when we lived in Yorkshire had two magnificent quince trees, each year laden with the golden globes. I begged some, and tried my hand at membrillo - I can say immodestly, that it was quite good. How these bright yellow things turn into a rich dark amber substance is surely pure an alchemic mystery.

Last week I spotted a tray of quince in our local community owned greengrocer - the closest to foraging quinces in these northern climes. I grabbed them, of course. The little cakes of membrillo are now on the high shelf awaiting their outing at Chelsea, while two jars of pickled quinces are maturing slowly in the chill of the winter kitchen. My love of all things pickled, vinegary, sour, spiced - now that might be the subject of another paragraph or two. Yums. 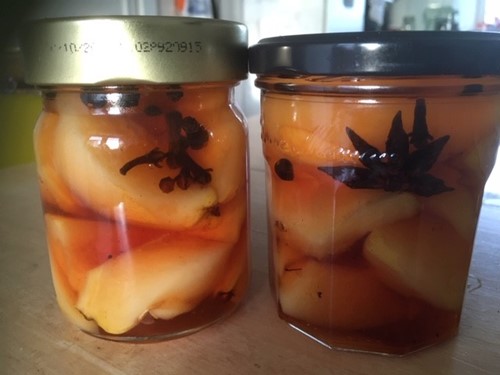 I’m a rambler I’m a brambler

In Scotland we do call them brambles though that is not the universal name down south. I can’t catch the ‘blackberry’ habit myself- you can take the girl out of Scotland but you can’t take bramble out of the girl. There is no doubt about it in my view that foraging first and foremost means brambling, north and south of the border. 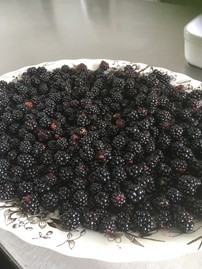 Legend has it when Lucifer was banished from heaven, he tumbled down onto a bramble bush. When he fell into the brambly prickly plant, he scorched the fruit with his fiery breath. He cursed the brambles and spat on them, making them bitter and unsuitable to eat. He renews his curse every year, so if they aren’t picked by the feast of Michaelmas (September 29), they become unfit to eat. Well in Scotland by the end of September those brambles are indeed often cursed by bad weather, so we would have been gathering those fruits for 6 weeks or more before then. In my experience we are rarely disappointed by the harvest - brambles are the gift that keeps giving around here in East Lothian, around the Wirral lanes, on the banks of the railway line in Liverpool. 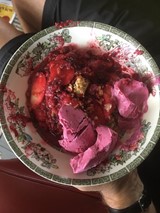 In the old days we picked brambles on Tuesdays and Fridays - on Tuesdays the fruits had ripened since the locals had been out en masse picking on the weekend and on Fridays they had recovered from the picking on Wednesday, early closing day for the shops. It is certainly true these days, when the shops are always open and people work all hours, that there are far fewer bramblers than there used to be. A sunny day is best and in full balmy autumnal sunlight the fruits are sweeter so avoid the rainy or dull days. If there are two of you then a big 1 litre yoghurt pot each (with a lid and a handle) will give you a very good haul. Plenty for freezing, bramble and apple jelly, fruity vinegar. Or try some Creme de Mure (perfect French style in a glass of fizzy wine). My grandson Frank goes for my bramble ice cream - bramble puree mixed in with whipped condensed milk and double cream ( or half and half double cream and natural yoghurt for a healthier version).

Finally the last word on the subject, here is proof, if you need it, that brambling is the monarch of the forage, a cultural and lyrical pastime.

Late August, given heavy rain and sun
For a full week, the blackberries would ripen.
At first, just one, a glossy purple clot
Among others, red, green, hard as a knot.
You ate that first one and its flesh was sweet
Like thickened wine: summer's blood was in it
Leaving stains upon the tongue and lust for
Picking. Then red ones inked up and that hunger
Sent us out with milk cans, pea tins, jam-pots
Where briars scratched and wet grass bleached our boots.
Round hayfields, cornfields and potato-drills
We trekked and picked until the cans were full,
Until the tinkling bottom had been covered
With green ones, and on top big dark blobs burned
Like a plate of eyes. Our hands were peppered
With thorn pricks, our palms sticky as Bluebeard's.

We hoarded the fresh berries in the byre.
But when the bath was filled we found a fur,
A rat-grey fungus, glutting on our cache.
The juice was stinking too. Once off the bush
The fruit fermented, the sweet flesh would turn sour.
I always felt like crying. It wasn't fair
That all the lovely canfuls smelt of rot.
Each year I hoped they'd keep, knew they would not.

These blowy cold winter days have put paid to foraging and pretty much everything else but staying upright against the wind. So, how to keep the theme going and use my time indoors productively? I can report I have found an answer which contains these most diverse items:

Yes, you will have guessed I have had my first go at making soap. The dehydrator coped with the various foraged plant items perfectly - humming away in the corner of the kitchen for many hours. Kelp made the record for swift dehydration. Online shopping got me the essential oils from a long established herbalist in Edinburgh. The local stores provided the other ingredients, notably the caustic soda from that source of just everything you need in a house, Pick and Choose.

Someone more learned than myself will have to explain why you can mix caustic soda with fat and it makes soap. What on earth? 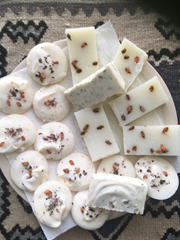 How can you do that and then have any skin left when you use it? Well you can and it works. The caustic soda is the ‘lye’ or the ingredient that causes the chemical reaction or sapification (another new word). On deeper investigation it appears that in the old days they used a strong alkaline solution of potassium hydroxide or sodium hydroxide, made by allowing water to wash through wood ashes.

My first batch was a bit iffy so I discarded that (too soft, colour horrible), but a bit of research suggested more coconut oil makes for harder soap, be very accurate with temperature, and don’t put the finished mix too near heat source. Readers, I now have three types of scented foraged soap curing in the cupboard for Chelsea.

The pine
The buckthorn
The kelp (with oatmeal)

In the run up to Chelsea we are publishing a series of personal blogs from Howard and Hugh Miller, the designers, plus behind the scenes videos and even a few recipes, to help showcase the immense amount of work that goes into planning and creating what is bound to be an award-winning garden at this year’s Chelsea Flower Show!

Read all of our Chelsea BLOGS