Baby Theo fought all the odds to overcome multiple complex heart problems after his life was saved by the cardiac team at Alder Hey. 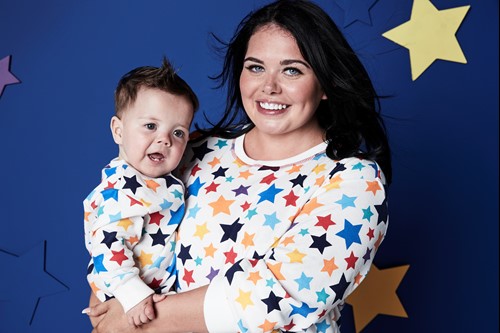 Theo Fry was just eight days old when he turned blue at home and was rushed to Salford Royal Hospital by paramedics. Dad Steve said: “Theo was totally unresponsive when we arrived at hospital and it was a real struggle for staff to stabilise him. His condition was critical. He was placed on life support and had x-rays and bloods taken. We were asked to wait in the family room whilst everyone did all they could to save him, we were told that his chances of surviving were low, we had to take it minute by minute.”

The x-ray results showed Theo’s heart was significantly enlarged. He was transferred to Alder Hey Intensive Care Unit for assessment by cardiac specialists. He underwent further tests, which revealed that he had a Ventricular Septal Defect (VSD) – a hole in the heart wall separating the two lower chambers and an Atrial Septal Defect (ASD) – a hole in the heart wall separating the two upper chambers. Theo also had an interrupted aortic arch, which is a rare heart defect that occurs when the baby’s heart does not develop normally in the mother’s womb meaning that oxygenated blood is unable to leave the heart and travel to other parts of the body. Steve said: “It was touch and go in intensive care as all they could do was try to stabilise Theo and hope that he would have the strength to make it to surgery.”

At 12 days old he was taken down to theatre by cardiac surgeon Ram Dhannapuneni and his team who carried out a 10 hour operation to re-build his heart using patches and donor tissue to repair the arch. But Theo’s recovery wasn’t straightforward, he had a cardiac arrest, numerous rhythm problems, sepsis and seizures, which meant he had to stay at Alder Hey for treatment for a further three months. He was discharged in July 2017, but had a small left ventricular outflow tract that was a result of scar tissue build up on the left side of his heart following the operation. This left him at high risk of cardiac arrest. Unfortunately, Theo was readmitted to Alder Hey at the end of November and spent three weeks in the high dependency unit after contracting a virus called Human Metapneumovirus, which caused respiratory problems. This led to the contraction of Influenza type B – a flu type various, which forced Theo’s heart to work far too hard resulting in a cardiac arrest days before Christmas.

Steve said: “Theo was down for 12 minutes on the cardiac ward, but the amazing team managed to get him back! “He was on life support in intensive care all over Christmas, but woke up at midnight on New Year’s Eve to say hello. “Over the next month or so we were in and out of the intensive care unit like a yo-yo. Theo was put back on life support for sepsis and shock.” His condition dramatically deteriorated, by late January he was arresting multiple times each day and had to be nursed by up to three members of staff to keep him alive.

“The team couldn’t sedate him as he was becoming too tolerant to the drugs. He was crashing every hour, we were told to prepare for the worst. After more than three months on life support Theo has lost four kilograms and we didn’t think he had another day left to fight. The decision was made by the cardiac team led by Dr Dhannapuneni to take Theo back to theatre to widen the ventricle - a procedure, which took around seven hours. Theo was eventually discharged from hospital in April this year. He still has a leak on his heart that is being monitored and treated with medication, but he is now full of life. Theo absolutely loves life. He always wants to be centre of attention; we blame the staff at Alder Hey for loving him too much and spoiling him!

None of this would be possible without the amazing team of staff at Alder Hey from domestics, cooks, nurses, physiotherapists, anesthetists, surgeons and cardiologists to name just a few. We are eternally grateful and lucky to have this amazing place and an amazing NHS.”