Sam and his family spent four months in Liverpool Women’s Hospital Intensive Care Unit before he was able to go home.

Sam was born in May 2020 to proud parents Zalena and Martin. He was born at 24 weeks gestation. He weighed just 790g and due to his extreme prematurity, he spent the next four months in Liverpool Women’s Hospital Intensive Care Unit before he was finally able to go home.

During that time, he had to be transferred to Alder Hey to undergo a number of operations. Sam needed two major operations to save his life and also had multiple major procedures to save his sight.

One of the concerns that Sam suffered with was a ruptured bowel, a potentially life-threatening issue. Following a five-and-a-half-hour operation, surgeons were able to save Sam’s life. 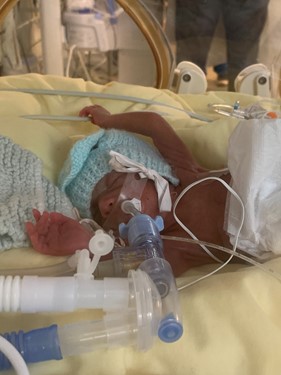 As Sam grew older, it was also discovered that he had a particularly advanced form of retinopathy of prematurity (ROP). He needed four procedures, which included specialist injections and laser surgery, to save his sight. As a result of those interventions, his eyesight was preserved.

Fast forward two years and Sam is now doing really well. Just after Christmas, he even took his first steps aided by his Mickey Mouse push along and also said DaDa for the first time!

Mum Zalena said: “A Surgical Neonatal Unit such as the one being built at Alder Hey would have meant we could have been a complete family staying together with Sam at the time he needed us both most. It would also have allowed us to feel a slight sense of normality having our own living quarters in which to develop as a family in those early days. Family orientated care was one of the key things for us during our time at Alder Hey. All any parent wants to do when their child is born is care for them. Having a critically ill child doesn’t change this want and we are so happy to have been encouraged and empowered by the Alder Hey team to be the main carers for Sam during our time there. Often when babies are born at such prematurity there is a multitude of specialisms that are required to help them to survive. This could involve surgery, specialist ophthalmology, X-ray services, physio and much more. Having all these services available on one site reduces the need to transport an already vulnerable baby between hospitals and allows the family to set up a base rather than being moved from pillar to post. Families very often live out of bags for months never knowing when they may have to quickly move hospitals again. This new unit will happily dispel this for so many families.”

Sam is featured in this year's Alder Hey and JOHNSON’S® fundraising partnership. In 2021 JOHNSON’S® pledged to support Alder Hey’s Surgical Neonatal Appeal, donating £83,733, which will fund one of the Family Integrated Care Rooms in the new Surgical Neonatal unit so parents and babies can stay together in a private and comfortable setting to bond as a family whilst still accessing expert care from clinicians. This year, JOHNSON’S® is continuing its partnership with Alder Hey, committing to fund an additional Family Integrated Care Room on the ward, with the ambition to raise as much as possible to support Alder Hey in our shared mission to help keep families together in neonatal care.