When Raees was born in March 2020, mum Farah had no reason to think that her new baby was anything but a healthy boy. 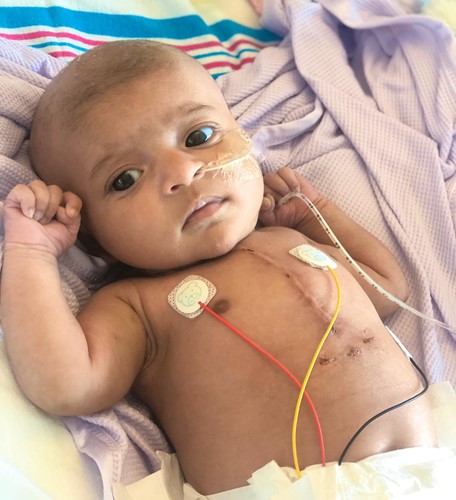 But at only 6 weeks old his parents became concerned when he started having difficulty breathing. After a scan at Royal Oldham hospital he was referred to Alder Hey Children’s Hospital, and was diagnosed with Transposition of the Great Arteries (TGA) meaning both the main arteries in his heart were the wrong way around. With Raees’ oxygen levels very low, his condition was life-threatening.

Mum Farah said: “I was completely shocked and numb when the doctors at Alder Hey told me he had TGA and with how ill he was. Our whole world was turned upside down.”

On his arrival at Alder Hey, Raees was also diagnosed with COVID-19. With the combination of a very complex heart malformation and his COVID-19 diagnosis, Raees’s chance of survival was remote.

In order for him to survive the day, Alder Hey cardiologists urgently performed a septostomy. This is where a small hole is created in the wall of the heart to allow the blood to mix, improving the amount of oxygen circulating.

The procedure was a success, but because of the COVID-19 infection, cardiac surgeons could not perform the complicated surgery now needed to correct his heart. Raees was put on ECMO; a heart lung bypass machine funded by Alder Hey Charity, which kept him alive until he was strong enough to have his lifesaving surgery.

Farah said: “It was a life or death situation…you have to be prepared for the worst. At this stage, we were just trying to keep him alive. As he had COVID-19 we couldn’t even touch him without our gloves on, we were in full PPE when around him. It was such a difficult time.”

Nine days after coming to Alder Hey, Raees had beat COVID-19 but he was about to undergo a high risk operation to repair his complex heart malformation, planned and led by the Chief Cardiac Surgeon at Alder Hey, Mr Rafael Guerrero.

Mr Guerrero said: “Baby Raees had one of the rarest forms of TGA which together with a severe damaged function of the heart and having COVID-19 infection make him an extremely rare and very sick and complex baby. Performing this operation to correct the heart malformation was the only chance for Raees to survive and for his family to have the opportunity to see their baby growing up.”

After 6 hours in theatre, the operation was a complete success and although baby Raees needed to regain his strength and recover from surgery he was finally over the worse.

“Our extraordinary team of doctors, nurses, cardiologists, anaesthetists, perfusionist, ward and theatre teams worked together in carefully planning and delivering Raees’ treatment. I am very proud of every single member of the different specialities who have been instrumental on the success of saving his life.” Mr Guerrero, Chief Cardiac Surgeon.

Raees spent a number of weeks at Alder Hey recovering but is now at home in Rochdale and getting to know his big brother, three year old Ayaan. Farah says she would like to thank everyone involved in helping to save Raees’ life.

“I am so thankful for everyone at Alder Hey especially Mr Guerrero and the NHS. They have done such an amazing job. Raees has been through so much and come out stronger for it. Doctors say there is no reason he can’t do anything he wants to. He can climb mountains, be a racer, whatever he wants. He has a life now.”

You can help us, and babies like Raees,  by setting up a monthly direct debit of just £5. Regular gifts help us to plan for the future, to fund life-saving equipment like the ECMO machine and to ensure that our brave young patients have brighter futures and the very best chance to thrive.