Whilst Micah was developing early in the womb, the nerves in his bowel stopped developing.

One-year-old Micah was born with a congenital condition called Hirschsprung’s disease. This is a rare bowel condition that affects roughly 1 in 5,000 children. This meant that whilst Micah was developing early in the womb, the nerves in his bowel stopped developing, which left him with a section of lower bowel that didn’t function.

As a result, Micah’s bowel became blocked shortly after his birth. He was transferred to Alder Hey’s neonatal unit and at just over 48 hours old he was taken to theatre to have the blockage removed and an ileostomy formed to enable his bowel to empty. An ileostomy is where the small bowel is diverted through an opening in the stomach.

Micah and his family spent a further two weeks in the neonatal unit with a team of nurses caring for him, as well as teaching the family all things ileostomy care and what to look out for with Micah's condition. 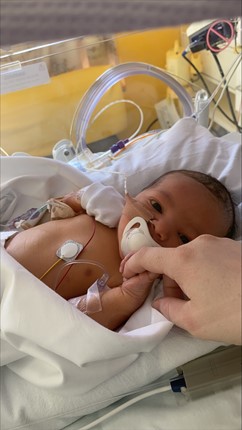 Over the past year, Micah has been in and out of Alder Hey for numerous procedures and stays due to his condition. At 8 weeks old, Micah had the part of his bowel without nerves removed and joined back together, and recently he's had his ileostomy reversed!

Kayleigh said: “After such a difficult year, we celebrated a year of his smiley little face! Alder Hey has become such a big part of our lives and we can't thank each member of staff enough for all they do for Micah and all the children and families that they care for. We are so blessed to have such a wonderful hospital on our doorstep! I think that we would have really benefitted from the new NICU building, especially the family rooms. Being able to be with your baby is much needed in these types of situations. The care is so focused on the little one as it should be, but I think it's important to remember that mum has just had a baby too. That space to be able to rest and be close is paramount. I feel I would have greatly benefitted from that and many mothers and fathers in the future will. The state-of-the-art equipment to be able to do all the magnificent procedures that the surgical teams do is beneficial too, to help babies coming into the world and to be able to reduce transferring them back and forth between hospitals will make such a difference to their families. I think it’s such a worthy cause.”

Micah is featured in this year's Alder Hey and JOHNSON’S® fundraising partnership. In 2021 JOHNSON’S® pledged to support Alder Hey’s Surgical Neonatal Appeal, donating £83,733, which will fund one of the Family Integrated Care Rooms in the new Surgical Neonatal unit so parents and babies can stay together in a private and comfortable setting to bond as a family whilst still accessing expert care from clinicians. This year, JOHNSON’S® is continuing its partnership with Alder Hey, committing to fund an additional Family Integrated Care Room on the ward, with the ambition to raise as much as possible to support Alder Hey in our shared mission to help keep families together in neonatal care.