Lincoln has improved rapidly since the operation and is Wrexham AFC’s number one fan!

Lincoln was born with heart abnormalities and required a life-saving operation at just 13 days old. During his recovery, he also suffered from sepsis but recovered ahead of a second operation to fully repair his heart, which lasted nine hours. Now, Lincoln has come on leaps and bounds and is at home in Wrexham with his parents.

Lincoln was born at Liverpool Women’s Hospital in July 2021 but after a previous 20-week scan, his parents knew that he would be born with heart abnormalities.
As a result, at nearly 24 hours old, Lincoln had to be transferred to Alder Hey to have life-saving open heart surgery at just 13 days old.

Despite a successful operation, Lincoln had to stay at Alder Hey for 7 weeks due to contracting sepsis, which is another life-threatening reaction to an infection. This is where the body reacts to an infection and can damage the child’s body tissues and organs. 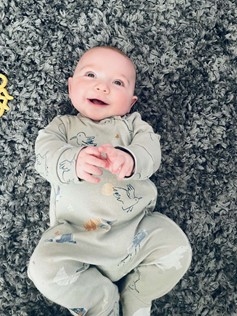 Lincoln was able to go home to Wrexham with his family after recovering but was back in hospital soon after to fully repair his heart having outgrown his shunt.
A shunt is a small tube that helps children with heart defects get more blood to their lungs.

Following another operation, this time totalling nine hours, his heart was repaired and after 48 hours in ICU, Lincoln was able to go home! Mum Georgi tells us Lincoln has improved rapidly since the operation and is Wrexham AFC’s number one fan!

She said: “Lincoln has always taken everything in his stride! Since his full repair he has come on leaps and bounds. He is like a different baby; he is so pink. The nurses on 1C were brilliant, they became our second family as they are all you have when you are in hospital 40 miles from home, but they really kept us going when times were tough, also when they were good. Without Alder Hey, Lincoln wouldn’t be here today. The transition from Liverpool Women’s Hospital to Alder Hey was scary to say the least, being in two different hospitals across an entire city from your baby that you’ve just given birth too isn’t the most pleasant experience however the transport team were great and kept us informed. A new NICU unit would have made a big difference to us as we wouldn’t have had to be apart from Lincoln as much. It is important to have all care in one place as being separated from him in the first few days was very hard. Having parent rooms would make a huge difference as you would be able to be close to your baby at all times which is comforting and reassuring.”

Lincoln is featured in this year's Alder Hey and JOHNSON’S® fundraising partnership. In 2021 JOHNSON’S® pledged to support Alder Hey’s Surgical Neonatal Appeal, donating £83,733, which will fund one of the Family Integrated Care Rooms in the new Surgical Neonatal unit so parents and babies can stay together in a private and comfortable setting to bond as a family whilst still accessing expert care from clinicians. This year, JOHNSON’S® is continuing its partnership with Alder Hey, committing to fund an additional Family Integrated Care Room on the ward, with the ambition to raise as much as possible to support Alder Hey in our shared mission to help keep families together in neonatal care.