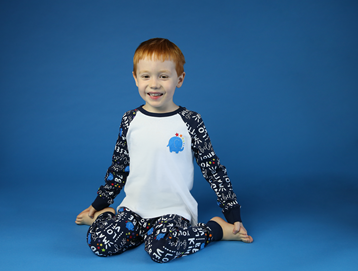 He has arrhythmia, cardiomyopathy and a closed ASD (hole in the heart). He has been treated by Alder Hey and Great Ormond Street throughout his young life. Mum and Dad, Claire and Neil, practically spent his first full year at Alder Hey, before Jake was transferred by helicopter to have open heart surgery at GOSH the day after his first birthday . It was believed the surgery was so risky that the family kissed his head goodbye for what could have been the last time. Thankfully Jake survived the operation. He is not cured and now has a pacemaker fitted so he still needs lots of support and ongoing care from Alder Hey. Despite all this, Jake is a happy, cheeky 5 year old and new big brother to sister Daisy.

“We love this year’s campaign and the fantastic design because Alder Hey has done so much more than just keep Jake alive. The ongoing support we have received as a family helped us deal with the challenges we faced and helped us become a family of 4. It is so important now more than ever that we look after our own and other people’s headspace. We’ve chosen “Be Kind” because it’s something we can all do to help with mental well-being and is a great starting point; be kind to others and to yourself.” Mum and Dad, Claire and Neil