Jacob Brindley was just 11 months old when he was first diagnosed with Acute Lymphoblastic Leukaemia (ALL) in 2009.

Jacob had no real symptoms, but his mum Claire had noticed he had some unusual bruising.  Jacob’s local GP referred him to Alder Hey where doctors  quickly made the diagnosis just weeks before his first birthday.

Jacob was treated at Alder Hey and was part of an international collaborative trial for the treatment of children with ALL under one year of age. This two year clinical trial included an intense six month chemotherapy programme, which included blood transfusions, bone marrow tests and lumbar punctures.  On top of this, Jacob required platelet transfusions to improve blood clotting after his platelet count was measured at 6 instead of the normal 400 when diagnosed.

Jacob successfully finished his treatment in 2011 but during a routine check-up in 2012, doctors found another lump and they discovered that Jacob’s cancer had returned. He faced further bouts of chemotherapy and radiotherapy.

Although he could have received some treatment locally Jacob’s family decided to stay and receive his treatment on the Oncology Unit at Alder Hey where Jacob was first treated. Jacob was eligible for another research trial for relapsed ALL which used further chemotherapy and localised radiotherapy.

In April 2015, Jacob was given the all-clear from his cancer once again but he does visit Alder Hey for check-ups every four months to make sure he remains well.

Jacob’s mum Claire said, "When we were told Jacob had leukaemia, we were totally devastated and shocked. It was much easier for him coping with the treatment as a baby, but he was still incredibly brave when aged 3 he had to go through it all again”.

“Alder Hey has been amazing and continues to do so with Jacob’s follow up care and support. All the staff on the ward are great; the nurses have been brilliant with Jacob. Everyone is so supportive and caring.”

“Fortunately, leukaemia in infants is rare. That is why it is so important to include patients like Jacob in international trials to develop new treatments. Results from these trials have been vital in the increasing the number of children who are cured of their leukaemia. Children who relapse from their leukaemia face an even more difficult time as they are older and more aware of what they are likely to face in their treatment. It took great courage and strength of will for Jacob and his family to go through a second lot of treatment as part of another clinical trial.”

Jacob loved helping us on the photo shoot for the  Alder Hey and Matalan #GetSpotted campaign, he was a little star! 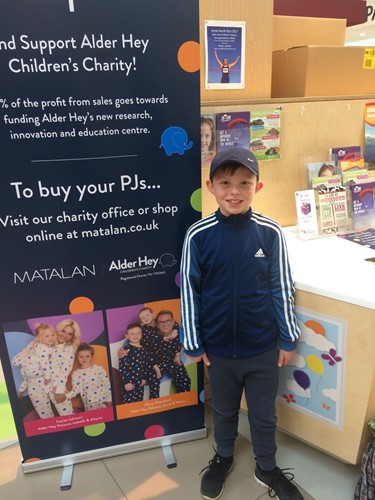