Seven year old Isabelle was diagnosed with Cystic Fibrosis at just three weeks old from her newborn screening test. Her younger sister Alayna was also diagnosed with CF shortly after she was born.

Cystic Fibrosis (CF) is caused by a faulty gene that a child inherits from both parents. The condition causes the lungs and digestive system to become clogged with thick mucus, making it hard to breathe. Children with the condition are also susceptible to chronic infection of their airways.

There is currently no cure for CF. The condition is progressive, meaning that as the child gets older, their lungs become increasingly damaged and they may eventually require a lung transplant.

Isabelle has to take medicines with everything she eats to help her absorb food better. She also follows a special diet to prevent malnutrition.

In 2015, Isabelle took part in a clinical research trial at Alder Hey. The TORPEDO study aims to find out which medications work best to treat airway infection with a bug called Pseudomonas Aeruginosa (PsA). PsA is a difficult bug to treat as it is quite resistant to usual antibiotics and it can cause life long, chronic infection. This can lead to symptoms like a cough getting worse, lungs not functioning as they should, frequent hospital admissions and a reduction in quality of life. If PsA infection is treated early and actively, then the bug can often be eradicated and not cause chronic infection.

TORPEDO will find out if antibiotics given orally (by mouth) or intravenously (by a tube into the vein) are better at eradicating the PsA.  Both treatments work but nobody knows if one is better than the other.

The study finishes later this year. The results of the Torpedo study will help doctors decide which treatment type should be used to treat PsA, giving patients the best possible chance of avoiding chronic infection for as many years as possible.

Isabelle’s sister, Alayna, now aged three, was also diagnosed with CF at 10 days old. She had a few complications when she was little including being born with dislocated hips and then catching RSV Bronchiolitis at just two weeks old.

Alayna caught the same bug, PsA just a year after Isabelle and also took part in the TORPEDO study.

Living with CF means that Alyana and Isabelle’s parents have to be that extra bit more cautious. Isabelle has to eat lunch with the teacher at school every day so that they can give her medication, but she gets to take a friend, so she’s made to feel extra special. Holiday’s also mean a lot more preparation and they have to be extra careful about where they play, no mud or hay which are filled with bugs.

Isabelle is a beautiful little girl. She’s very creative, loves arts and crafts, horses and unicorns. Her sister Alayna loves story books, princesses and dolls. They both dote on and love to torment their little sister Lottie who is CF free.

Mum Katie said: “We took part in the trial because my children will have a lifetime of CF so I want to improve their care as much as possible and reduce their risk of serious infection as well as prospects for other children. Life expectancy thankfully has already increased for CF patients because of similar trials in the past.”

Professor Kevin Southern said: “Cystic Fibrosis is a serious progressive condition and in many people with CF can result in significant chest disease which in some leads to early death from respiratory failure. However, the outlook for people with Cystic Fibrosis has improved considerably in recent years, because of new exciting therapies that aim to treat the underlying problem.  This has made trials such as TORPEDO even more important, so that we can keep young people with CF in as good health as possible.  It is important that patients like Isabelle and Alayna keep as well as possible to benefit from any new advances.  Their parents work hard every day to achieve this and to give them as normal a life as possible.”

Isabelle said “I want to help me and my little sister and people like us so we get sick less and can play more.”

Isabelle and Alayna helped Alder Hey by agreeing to take part in our #GetSpotted campaign with Matalan, along with little sister Lottie. What a trio! 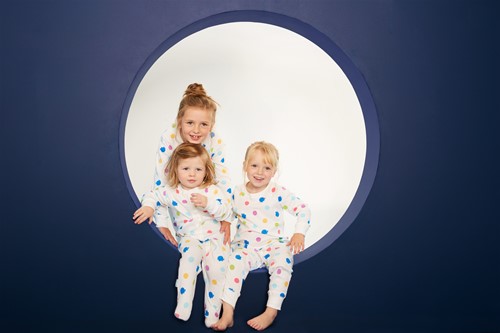