Harry Howard, from Wigan, has had some wonderful news….he’s beaten cancer.

Harry’s mum Helen knew that the leg pains her son had for three weeks were more than just growing pains. After a series of tests at Alder Hey, Harry was diagnosed with Stage 4 Non-Hodgkins Lymphoma in November 2016. 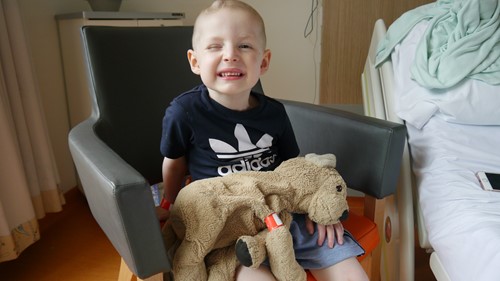 Non-Hodgkins Lymphoma is a cancer of the blood but is not one single disease, rather a group of several closely related cancers. Stage 4 means that the cancer was found in several parts of one or more organs or tissues (in addition to the lymph nodes) or in the liver, blood or bone marrow.

Harry had over 200 treatments at Alder Hey including seven rounds of chemotherapy, 25 chemotherapy drug infusions, eight surgeries, 36 blood and platelet transfusions, 14 lumbar punctures and 20 general anaesthetics. In June 2017 he was given the news that his Cancer was in remission

Harry’s family were so grateful to staff at Alder Hey who rallied together to treat Harry that they wanted to give something back. They took part in several clinical trials at Alder Hey to help improve future treatments for children like Harry.

“The trials were never too intrusive; it was just a case of taking slightly bigger samples of blood/urine/tissue when he was having his routine treatments. It’s because of children like Harry taking part in clinical trials that the treatments are available today which have helped Harry beat a very aggressive and advanced cancer. We are eternally grateful for that."  Helen, Harry's mum.

One of the trials Harry took part in at Alder Hey, the Inter-B Ritux Trial, was testing a new treatment aimed at making chemotherapy more effective.

Consultant Lisa Howell said: “If left any longer, the cancer Harry had could have paralysed him. Research is so important to not only improve prognosis for patients now and in the future but also helps decrease side effects of treatments including sickness. We want to make our patients as comfortable as we possibly can by tailoring treatment to the individual and making chemotherapy work as effectively as it can. We are grateful to children like Harry for taking part in clinical trials and helping us improve future treatments.”

Harry and his family have spent 140 nights in the hospital in total and Christmas 2016 was a terrible time with Harry extremely poorly. A trip to Lapland for Christmas 2017 to celebrate a very extraordinary little boy was planned so the family could have an extra special Christmas together.

Harry featured in the Alder Hey and Matalan #GetSpotted campaign in 2017, and was an absolute star on the photo shoot! 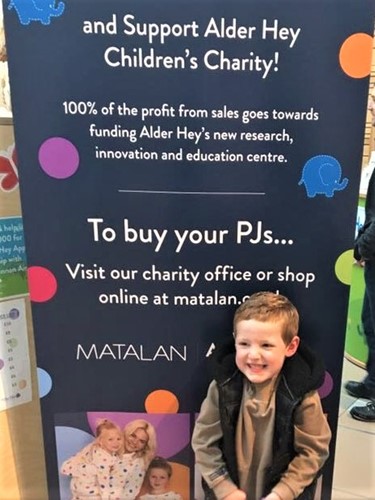