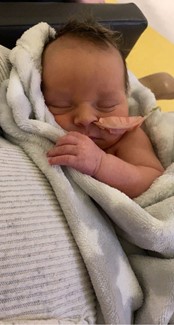 Frankie was born in March 2022. Prior to his birth he had been diagnosed with gastroschisis which meant he would be born with his bowels on the outside of his stomach and surgery to fix this would be needed within hours of birth.

Gastroschisis is a rare condition which affects only 1 in 3,000 babies. These operations can only be done in a specialised children’s hospital with full paediatric surgery facilities such as Alder Hey, so Frankie and his family had to leave their local hospital and make the trip to an unfamiliar environment.

Frankie’s mum Jessica was also separated from Frankie during his first night at Alder Hey while she was waiting to be discharged from Arrowe Park Hospital. This meant that she was unable to see her newborn baby until the next day, apart from five minutes before the transport team had to move him to Alder Hey.

At midnight that evening Jessica received the phone call to confirm that all had gone well with the one hour-long operation, and that Frankie was recovering in the Neonatal Unit on the cardiac ward at Alder Hey.

Despite a difficult experience, the following day Frankie was reunited with his mum. He now continues to recover and Frankie is exceeding expectations.

Frankie’s mum Jessica said: “I couldn’t be prouder of my son and I couldn’t be more grateful for every single staff member at Alder Hey. It’s amazing to see how far he has come. We have had a few setbacks, but we always keep a positive mind.”
Speaking on her experience following Frankie’s birth, she said: “The new NICU unit would have definitely benefitted us, going to different hospitals can be quite confusing and finding your way around can be quite stressful. If there was one place you could go for all of it, that would be amazing! It would also allow you to get to know the same staff members and start to form a little bond with them, the doctors, nurses, and other staff. When you start having conversations with these people and get familiar with a place, it makes you feel more comfortable.

“When your baby is away from you, you want to be able to go somewhere where you can see them, you want to feel safe and familiarised instead of going to a new place and being worried about your child, whilst also not knowing the people there.
“The whole family being able to stay over would be nice, as it can give you the feeling of being able to take your baby home after birth. Just being able to have the family together would make you feel much more comfortable.
“I was a bit worried at first about just going to a different hospital after Frankie was born, especially because I live over the water on the Wirral and going a bit out of the way. It was a struggle to get used to it all but now that we’re here, it’s been lovely!” 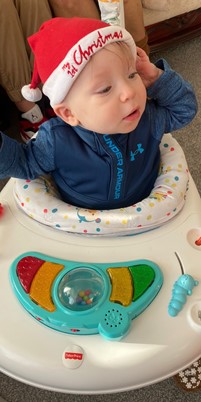 Frankie is now doing very well, and meeting all his milestones, with no need for recurring appointments at Alder Hey. He spent his first Christmas surrounded by family and Jess gave us this update:  "Frankie had an amazing first Christmas with us and our family. Santa brought him lots of noisy toys and books which he loves and he was spoiled by family. It was amazing to be able to spend it all together. He was definitely more interested in the wrapping paper and the boxes more than he was the toys on Christmas Day! He had a mini Christmas dinner and covered himself in carrot and turnip.  He’s a very happy boy even through all the teething ! His personality is starting to come through so much he’s such a happy boy."

Frankie and Jess have featured in several campaigns supporting the Charity's Surgical Neonatal Appeal including in B&M Stores where selected Proctor and Gamble products sold by the retailer helped to raise £55,000 over summer, our annual Matalan PJ Campaign, with PJs still available for all the family here and in our online pre-Christmas Light Switch On film.