Betty's battle to survive began the moment she was born.

Betty came into the world over 4 months early and weighed only 650 grams. She was very fragile and very sick. Because of her extreme prematurity she needed neonatal intensive care at Liverpool Women’s Hospital where her immature lungs were supported by a ventilator.

Betty was so poorly that her bowel perforated in two places. She was critically ill and was whisked over to Alder Hey by ambulance for emergency surgery; the first of many such visits. Sections of Betty’s bowels were removed, but because she was so unwell it was not safe to join the bowel back together. This meant that Betty had stomas formed (the bowel ends being brought out on the surface of the stomach).

Betty had a difficult time after surgery. She suffered many infections, and her times off the ventilator never seemed to last long. She needed intravenous feed directly into her bloodstream and couldn’t even have specialised premature baby milk. Betty’s family began to lose count of how many blood transfusions, blood cultures and lumbar punctures Betty had. Her liver was affected badly by the intravenous feeds, so even though she was still very small she came back to Alder Hey for an operation to reverse her stomas and join her bowel back together.

But Betty’s struggle didn’t end there. On 1st February 2018 Betty left Liverpool Women’s Neonatal Intensive Care Unit, to begin the next stage of her journey at Alder Hey Children’s Hospital. A couple of weeks later and Betty was rushed to theatre for an emergency tracheostomy after she suddenly stopped breathing. Betty astounded her parents yet again and bounced right back. 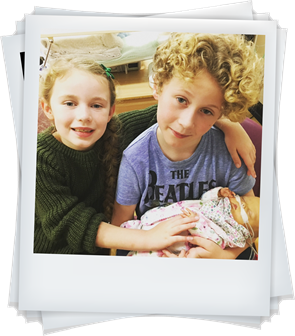 Determined to reunite their family and bring Betty home to be with her brother and sister, Stanley and Martha, Betty’s parents, helped by the dedicated team of professionals at Alder Hey, trained as quickly as they could to have the knowledge and skills to deal with her tracheostomy and other medical needs.

Betty finally went home for the first time after 13 months in hospital.

Betty’s dad, Phil, said “Betty is just amazing. She is the most delightful, placid and brave little girl. A nurse once said to us, ‘Betty brings out the best in people’. Phil continued “Betty’s journey will continue and the remarkable NHS that saved her countless times will continue on this road with her. Betty is our little miracle and no matter what comes we will all continue to love her with everything we have and with utter joy and immense gratitude to those that never gave up on her and gave us this most precious gift.”

Betty is featured in this year's Alder Hey and JOHNSON’S® fundraising partnership. In 2021 JOHNSON’S® pledged to support Alder Hey’s Surgical Neonatal Appeal, donating £83,733, which will fund one of the Family Integrated Care Rooms in the new Surgical Neonatal unit so parents and babies can stay together in a private and comfortable setting to bond as a family whilst still accessing expert care from clinicians. This year, JOHNSON’S® is continuing its partnership with Alder Hey, committing to fund an additional Family Integrated Care Room on the ward, with the ambition to raise as much as possible to support Alder Hey in our shared mission to help keep families together in neonatal care.

Betty and her family represented our patients at this year's Grand National as well as at the opening of the RHS Chelsea Flower Show 2022.